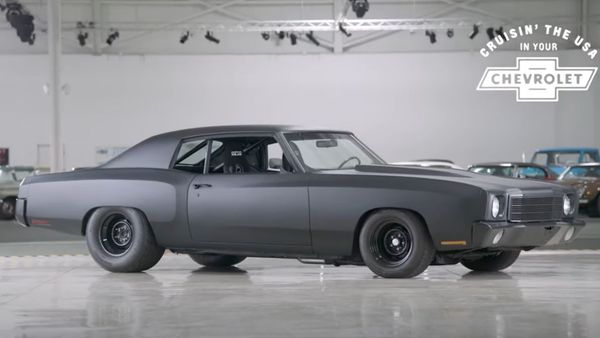 We don’t even try to hide the fact that we love muscle cars, especially ones that are built. That’s why this 1970 Chevrolet Monte Carlo is super exciting to see, because someone really made the car their own and it turned out super cool. That someone is Adrienne Peters, who just so happens to work as Chevrolet’s Performance Parts Product Marketing and Social Media Manager.

What Peters has done with this first-gen Monte Carlo is turn it into a more aggressive-looking machine. Thanks to custom wheel flairs and drag radials, the car has a wider, lower, and more planted stance. Then there’s the blacked-out appearance thanks to matte black paint covering not only the body but whatever trim pieces are left. Black steel wheels keep with the simple, muted appearance.

Of course, that cowl induction hood hints at something sinister underneath. This build isn’t just about appearances, because Peters obviously has the need for speed as well. A friend had an original LS6 short block V8 from a ’70 Chevelle, which now resides in this car. Peters added performance parts for even more tire-shredding fun.

Just as impressive is the fact Peters fabricated the dash herself, which captures that minimalist vibe perfectly. It houses black gauges with red backlighting, adding to the menacing nature of this Chevy. Racing seats up front, a roll cage, and a Hurst shifter round things out.

According to Peters, she purchased this Monte Carlo while she was in college. Even back then, she had an idea of what she wanted to do with it. As you know, it takes time to build a car like this, unless you’re rich and hire a team of people to do it for you, but then it still takes time (but not as much).

So, what do you think of this Monte Carlo?

See our comprehensive vehicle overview for the 1970 Chevrolet Monte Carlo including production numbers, performance specs, factory colors, and OEM brochures. Also, check out additional model years or view other Makes and Models in our Research center.