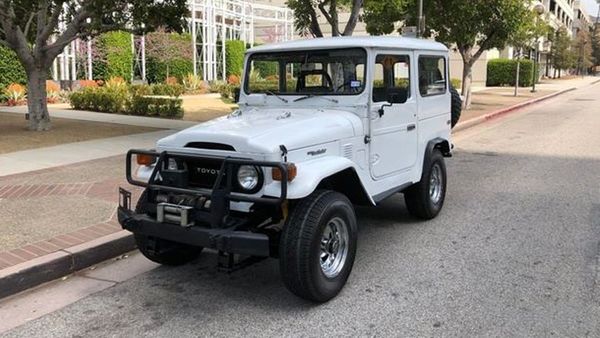 The only thing that can make an FJ better is a V8 engine.

The Toyota FJ40 is one of the best all-terrain vehicles ever made, and about the only thing this off-roader ever lacked was the grunt of a V8 engine. While V8-swapped FJs aren't hard to find, this 1976 Toyota FJ40 being auctioned off at the Leake Virtual Live Auction could be one of the nicest builds you'll find.

In place of the variety of inline-six engines the FJ40 offered (including torquey diesel options), this one packed a Chevy 350 cubic-inch V8 under the hood, and looking at pictures of the engine compartment, it would appear that the only part of this engine that wasn't rebuilt or replaced are the exhaust manifolds. The cool part of this FJ is that it is just as ready to take to a show as it is to tackle off-road terrain, and it's ready to cruise with power brakes, a new radiator and brand new tires.

This FJ has at least undergone a partial restoration with an all-new interior including aftermarket stereo system, but the exterior looks just as nice with clean body lines, off-road-ready wheels and tires and a solid push bumper with a 5,000-pound winch. This model has the dual swing-out "ambulance-style" rear doors, which open to reveal a pair of side-mounted jump seats.

This 1976 Toyota FJ40 will be up for grabs through Leake Auctions as a part of a 44-car online-only auction on September 14th . For your shot at owning this V8-swapped FJ or any of the other classic and collectible cars that will be crossing the auction block, be sure you're registered to bid.