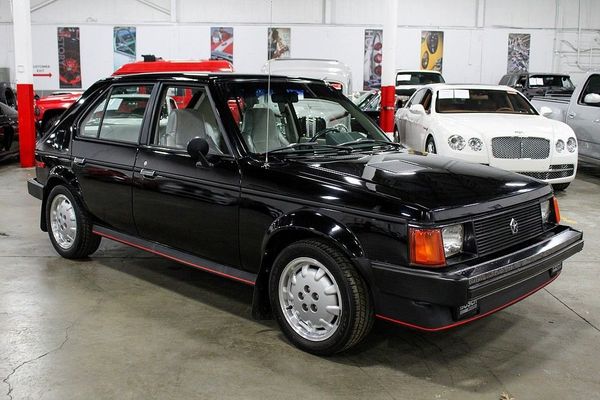 What could be more '80s than a couple of Shelby-tuned front-drive sport compacts?

After a falling out with Ford in the 1960s, Carroll Shelby teamed up with Lee Iacocca again in the 1980s to produce a line of tuned Dodges in a relationship that would last almost 20 years. Although Shelby's Ford products packed big, high-powered engines under the hood, his tuned Mopars tended to be sport compacts with the tagline "powered by Dodge, unleashed by Shelby." The first of which was the Dodge Shelby Charger but the most popular is probably the Dodge Omni GLH, and you can find an example of each of these cars for sale now.

In 1983, the Shelby Charger was introduced, and someone must have known that would be a special car because this one was tucked away and survived to today with just 16,000 original miles on it. This car is absolutely flawless with its silver and blue paint, and the matching two-tone interior is just as clean. Under the hood, the first-year Shelby Charger was powered by a 2.2-liter four-cylinder backed exclusively to a five-speed manual gearbox.

Streetside Classics has this well-preserved, low-mileage 1983 Dodge Shelby Charger listed for $15,995, which seems like a great deal for a show-worthy, Shelby-badged car.

Goes Like Hell. That motto is what Shelby's Omni GLH is named after, and these cars have a reputation for backing up that name with impressive sport compact performance. The Omni GLH was first introduced in 1984, but optional power was available in 1985 thanks to the 146-horsepower 2.2-liter turbocharged four-cylinder. This high output had the GLH nipping at the heels of cars like the Mustang GT and Camaro Z28, and it also looked cool with its monochromatic paint job and bigger alloy wheels.

This particular 1985 Dodge Omni GLH is also a survivor with around 50,000 original miles, and it's being listed through GR Auto Gallery for $14,900.

The Dodge Shelby Charger and Dodge Omni GLH are both small but notable footnotes in Carroll Shelby's legacy, both of these sport compacts represent excellent investment-grade cars as '80s classics continue to grow in popularity.