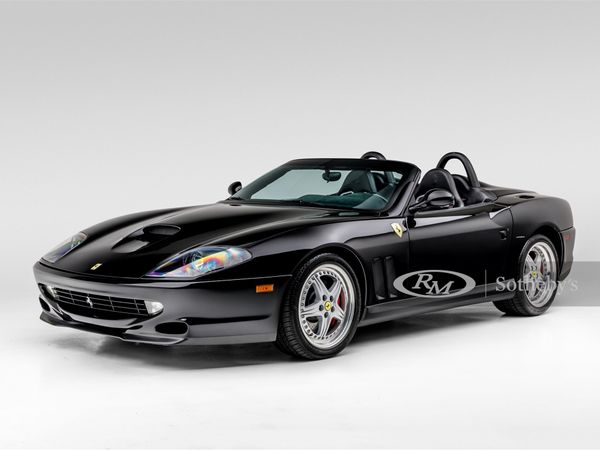 All Ferraris are highly collectible automotive masterpieces regardless of what era you're into, and this rare 2001 Ferrari 550 Barchetta Pininfarina is a perfect example of that. Introduced in 2001 to celebrate the 70th anniversary of Pininfarina, the Ferrari 550 Barchetta was a rare roadster with only 448 units being built, and this one that will be up for grabs during RM Sotheby’s Online Only: Driving into Summer auction is the 375th example built.

The 550 Barchetta Pininfarina was developed as a roadster version of the 550 Maranello coupe, and it continued the legacy of front-engine, V12 Ferraris with a 5.5-liter V12 mounted under the hood. Similar to past Ferrari Barchetta models, the 550 was only equipped with a rudimentary soft top to be used sparingly in the case of a sudden rain storm. To make this particular 550 Barchetta a little more practical, it comes with a removable carbon fiber hardtop weighing just 20 pounds, which cost $30,000 back when this car was new!

Like most Ferraris, the ownership history of this 2001 Ferrari 550 Barchetta Pininfarina is well documented since new, and with just over 14,000 actual miles showing on the odometer, this rare roadster will definitely be a welcomed addition to any collection. This Ferrari has been well cared for and it's all up to date on service and maintenance, and it comes all of the factory components including the soft top, tonneau cover, tools and owner's manuals.

This rare 2001 Ferrari 550 Barchetta will be one of more than 80 classic and collectible vehicles that will be up for auction during RM Sotheby’s Online Only: Driving into Summer event until bidding ends on May 29th. This auction comes on the heels of the successful Online Only: Palm Beach event, which had an impressive sell-through rate of over 70 percent and netted sales of over $14 million.