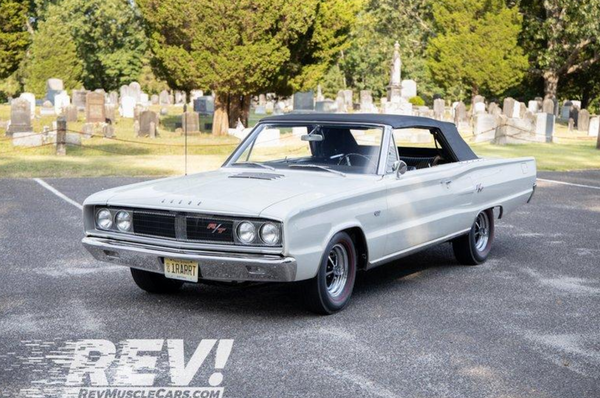 The only example sold new with a factory automatic transmission in the United States.

When you read a car sale ad and they list it as a "one-of-one", that could mean something as minor as the only one offered with colored stitching. Only three '67 Dodge Coronet R/T convertibles were powered by the mighty HEMI from the factory, and this is the only example that was equipped with the 727 TorqueFlite automatic transmission. This one-off 1967 Dodge Coronet R/T HEMI Convertible is a part of our Motorious May Muscle Cars Only Online Auction that runs from May 5th until May 12th. This rare gem could be proudly parked in your garage.

The current owner of this '67 Dodge Coronet first saw the car in 1971 as he was walking through his high school parking lot. He kept tabs on the car for 12 years and eventually became its fourth owner, and in 2015 he became the eighth owner as well.

During its early years, this was a show car on the World of Wheels circuit. At the time, its exterior was sprayed in a custom paint job in a green metal flake and adorned with bright red flames. Living a double life, this car could be seen dominating Atco Dragway on its days off from being a show car. The 426-cubic-inch V8 under the hood was outfitted with 12.5:1 pistons, headers, a big cam, and the normal go-fast modifications to make it a force on the quarter-mile. Kept safe from most elements, this muscle Mopar held up well.

In 1983, this car was brought back to factory specifications by the current owner, all except the rear end, which is a period-correct Dana 60. At the time, it was sprayed in its factory hue of W Code White over original sheetmetal. The original floor pans still have remnants of the green paint that it wore through the 1970s and early '80s.

As mentioned above, the car was given a single-stage repaint in its original color of W Code White, and it shows in fantastic condition that is worthy of any car show. The body of the car retains all of the original sheetmetal, and all of the stainless steel trim and chrome brightwork are in excellent condition. This classic Coronet features the 500-spec grille that is blacked out instead of the R/T grille. The second owner, that prepared the car for World of Wheels car show circuit, replaced the original parts in the late '70s. The convertible top looks new and functions as it should.

Open the hood to a clean and factory-appearing engine bay. The engine starts and runs as if it came straight off the assembly line, but is not likely the original although it is date-code appropriate to the era. The current owner has stated that the original motor was not in the car when he purchased it, and that he had rebuilt this one in the mid-1980s. Also, the engine was recently serviced and tuned. At that same time, it was given a new factory-spec gas tank and OE-spec exhaust system. The transmission is believed to be the original to the car, and it was also rebuilt. Everything works as it should including the heat and power steering.

The undercarriage is unrestored but has been well-maintained. And the floorboards are free of all rust and are clean. No surface rust or any sort of rust can be found at all, and the floor pans and trunk are original to the car. A complete visual inspection was performed and confirmed by Dave Wise.

Inside, the car remains almost all-original and in excellent shape. The original trim is unrestored and shows patina consistent with age. Gauges have been mechanically restored recently by Instrument Specialties, INC. All gauges, lights, and accessories all perform flawlessly. The upholstery shows no rips, tears, or blemishes of significance. Since the car was used as a show car mostly, the interior reflects as such.

This car is well-documented throughout all stages of its life with extensive owner history, and it was featured in the Mopar Collector's Guide, Mopar Action Magazine, and featured at the class of 1967 Invitational, MCACN 201. If interested in this rare 1967 Dodge Coronet R/T HEMI Convertible with the only automatic in the United States, be sure to check out our Motorious May Muscle Cars Only Online Auction. This rare gem is sure to make somebody a happy camper.