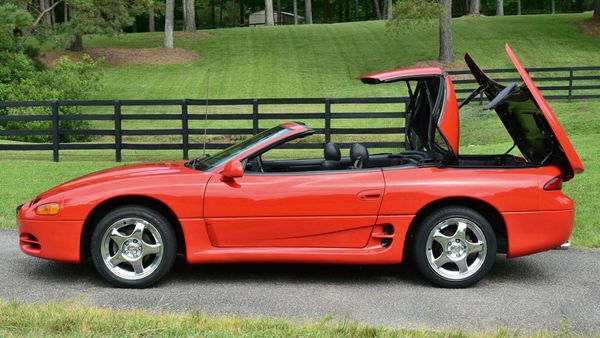 This is one of just 184 non-turbo 1995 Spyders wearing this color combination.

Japanese sports cars hit the scene hard in the 1990s, but the Mitsubishi 3000GT Spyder is, by far, one of the rarest of the bunch. A little over 1,000 Spyders were made for the 1995 and 1996 model years with only 376 non-turbo SL models being made for 1995; of those, just 184 were painted in Caracas Red with a gray leather interior like this 1995 Mitsubishi 3000GT Spyder that is will be up for grabs through Raleigh Classic Car Auctions.

These rare Mitsubishis were created in a partnership with U.S.-based ASC to transform the sporty coupes into the first retractable hardtop convertible since the 1959 Ford Skyliner. The Spyders were partially assembled in Japan before being shipped to California to be converted into a convertible. Two engines were offered on the Spyder including a naturally aspirated 3.0-liter V6 on the SL trim level and a twin-turbo version of this engine on the VR4.

In its first year, four colors were offered on the Mitsubishi 3000GT Spyder, but Caracas Red was, by far, the most popular accounting for just over half of all Spyders. As if the rarity wasn't enough to make this 1995 Mitsubishi 3000GT Spyder collectible enough, this hardtop convertible has been owned by the same family since it was new and it survives today with only 42,0250 actual miles.

This ultra-rare 1995 Mitsubishi 3000GT Spyder will cross the auction block at Raleigh Classic Car Auctions' Summer 2020 Raleigh Classic, which takes place August 21-22. Be sure you're registered to bid for your shot at owning this modern classic.