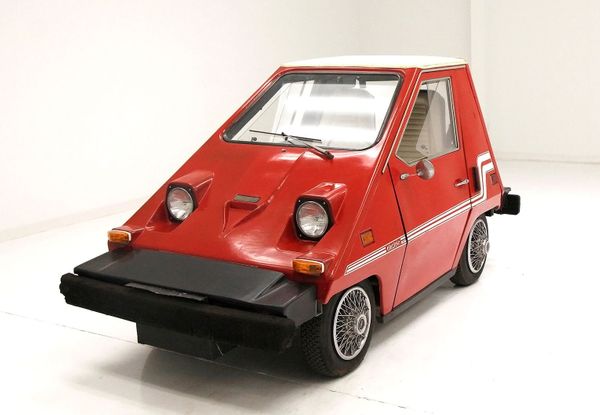 This wedge-shaped electric car was a pioneer that helped pave the way for the electric and hybrid car models available today.

While it may not be fastest, the coolest, or most exhilarating, there's no denying that the Citicar is interesting. Surprisingly, this two-seater electric car has a top speed of almost 40 miles per hour, 35-mph to be exact. Once in operational condition, this could challenge a peppy golf cart to a heads-up race. If anything, the kids will love it with its wedge-shaped body and cartoon eye-like headlights as if its ready to help Lightning McQueen as a pit crew member in the Disney's Cars. In barn find condition, this 1976 Citicar Electric Car is being offered by Classic Auto Mall. Just know that the car does not have a title and is being sold on a Bill of Sale only.

The electric Citicar can sit two comfortably, and it has a switch for a shifter. It also has plenty of voltage to supply power, especially for an early attempt at an electric car. While it has its imperfections, this little gem helped pave the road to the electric and hybrid cars produced today. There seems to be no stopping the electric car freight train, either, as it is going full steam ahead.

On the exterior, it is a fiberglass wedge that is slathered red with a white top to help keep the inside cool. Considering that this electric wedge can reach 40-mph, the crash bumper attached to the front is about as big as the car itself. For some added flair, a dual spear stripe was added to the outside complete with the word "ELECTRIC" in a computer-type font. For fresh air, the side windows slide open. The batteries are accessed by lifting up the rear rectangular window. Likely weighing more than the car are the spoked chrome wheels with an Oldsmobile logo, but it doesn't hurt to have a little style.

Interior-wise, the dashboard is a plethora of meters, gauges, lights, and switches housed in woodgrain. Large high-back vinyl sit inside, and the floorboard is covered by black carpeting in fair condition.

The drivetrain is mostly unknown, but according to the listing, it has a 6-horsepower electric motor capable of 35-mph as mentioned above. Range is unknown, and this model is currently not operational. The undercarriage features an aluminum tube and rectangular bar frame, aluminum floor pans only have minor surface rust.

The brainchild of Ron Gremban, who heads research and development of the Sebring Vanguard Citicar. Gremban, became an EV activist after piloting an electric car from Pasadena to Boston over the course of 9 days to promote the technology. After the Arab oil embargo in the early '70s, Gremban joined the team at Citicar.

If interested in this unique 1976 Citicar Electric Car in barn-find shape, then go ahead and contact Classic Auto Mall. Listed at $3,500, this could be the perfect project for anyone looking to get into EV cars. Cool factor is that it is from the mid-'70s and somewhat a pioneer in its field. Just know that the car does not have a title and is being sold on a Bill of Sale only.