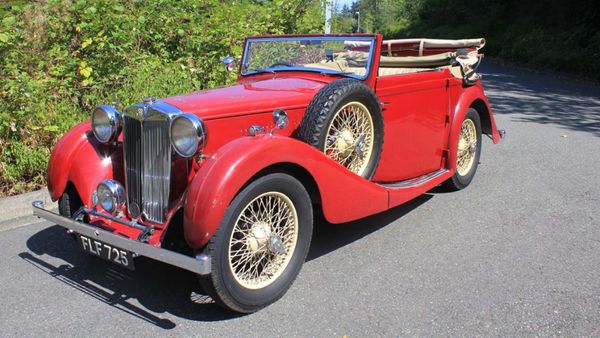 Every classic car tells a story, and this MG's story is touching.

Since 1968, this 1939 MG VA Tickford Drophead coupe has been owned by a single family based on the West Coast, and now this pre-war British car is looking for a new home through the upcoming Lucky Collector Car Auctions. As we've come to love from vintage MGs, the Tickford Drophead coupe is a two-door roadster with seating for four, and these cars were built in very limited numbers for just three years before the start of World War II.

According to the listing, only 551 of these MG VAs were built, and this final-year example was imported to the U.S. from England in 1968 by the seller's late father. The MG spent 30 years enjoying Southern California and occasional cruises before being shipped up to Washington where it was kept in a climate-controlled storage area. This car has been displayed at numerous car shows over its lifetime, and it remains a driver-quality show car.

Today this car survives with plenty of patina, but the important part is that it's a complete car in running condition. Although this 1939 MG VA Tickford Drophead coupe is just a restoration from becoming a concours winner, it can be driven and enjoyed as it sits. Despite its long hood, this roadster is powered by a 1,548 cc four-cylinder engine and a four-speed manual transmission. The coolest part about the MG VA Tickford Drophead coupe is the convertible top, which can be set in three positions: fully closed, fully open and a removable portion above the front seats.

This 1939 MG VA Tickford Drophead will be up for grabs at the Lucky Collector Car Auctions 2020 Fall Classic, which runs August 29-30, so be sure you're registered to bid.