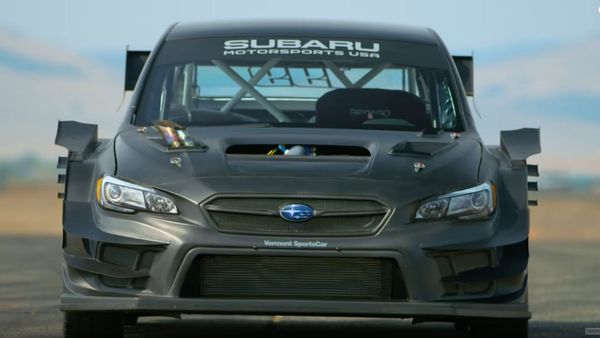 This thing was purpose-built for the film.

When Gymkhana was a new thing, people were just amazed at the fancy driving skills on display as well as the beautiful cinematography. Maybe we’ve all become a little jaded, because it seems like things have to become increasingly extreme just to get everyone to notice. There’s a lot of pressure on Travis Pastrana to wow the crowds, which is why this extreme Subaru STI was built specifically for the new film. It’s a pretty crazy build, but when you have the combined forces of Subaru Motorsports, Yokohama Tire, and others that’s what you get.

Some might be questioning why this car is for Pastrana and not Ken Block. Nothing lasts forever and Block handed off the series to Pastrana in the spring, a fact not everyone seems to have caught. It’s almost like a pandemic or something like that has overshadowed the more important news items for the past few months.

This STI is crazy, with apparently all the body panels and much, much more made of carbon fiber. You can see the exhaust exiting the hood. Plus, the aero on the Subaru is just insane, especially all those canards.

Many are excited Subaru is doing Gymkhana again. With the climbing success of the brand there’s been growing criticism that the Japanese automaker has gotten away from its roots, is becoming a mini Toyota, etc. Hopefully this helps remind everyone that Subaru still has some interesting performance cars. Also, it wouldn’t hurt if the second-gen BRZ had a lot more power via a great turbo system.

A truly amazing detail about this car is that the Yokohama tires on it aren’t anything super special or exclusive. In fact, you might have the same ones on your ride. At about 12:35 in the video they list out the three different types of tires they used.

Check out the video since you get to see Pastrana practicing with the car. He’s on an airfield and is going around cones, but it’s still pretty interesting to see.