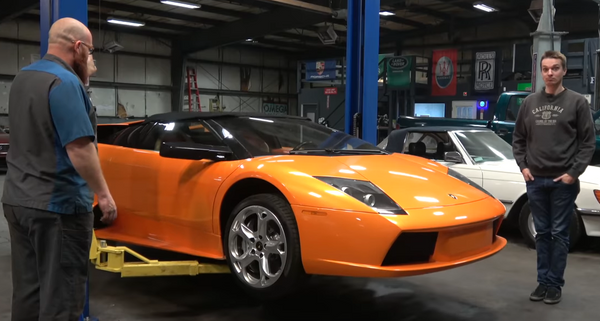 You might want to pass on anything cheap and exotic.

One of the wonders of YouTube is you can watch other people make all kinds of bad life decisions and then avoid doing the same. Tyler Hoover of Hoovie’s Garage is a great example, considering the guy buys all the cars you should just avoid. His latest and perhaps most regrettable decision was to scoop a “cheap” Lamborghini Murcielago Roadster for $76,000. Sure, the supercar looks great, but it was listed at a bargain price for a lot of good, expensive reasons.

First off, and it’s a little bit of a tangent, but it’s really weird seeing a Lamborghini with Kansas plates. Yes, I’m well aware there are exotic cars in the Sunflower State, but the ratio is nothing like in many other parts of the country.

Anyway, this Lamborghini Murcielago Roadster has some big problems. Detailing them all out is a little much, so if you want all the details watch the video. The big one has to do with the transmission, which makes a foreboding sound every time it shifts into first. When they drain the transmission, they find pieces of the teeth for first gear, which would have most people balled up on the ground panicking over how much that will cost to repair. Speaking of cost, the transmission rebuild alone could set him back $30,000. The other problems total up to about $18,000. It’s enough to make you think twice about snatching any basement-bargain exotic.

While you might not be shopping for something nearly as exotic as a Lamborghini, let this be a lesson. If the car is suspiciously cheap, there’s probably a good reason, and it might not be that great sob story the owner is telling. No doubt Hoover knew this when he bought the Lambo and did it just for some great entertainment factor on his YouTube channel, so at least he’s monetizing a bad financial decision.

The other point reinforced by this video is that you should have a car you’re interested in buying inspected by a mechanic you trust. He can catch all kinds of problems before you pull the trigger, so at least you know what you’re getting into if you decide to go ahead and plunk down your hard-earned cash. A mechanic’s inspection might not always be an option, but when it is you’re wise to exercise it.