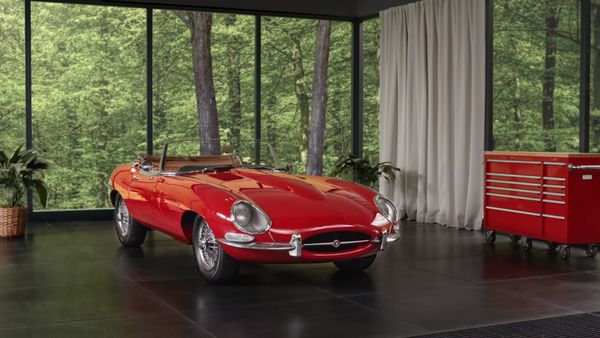 The ad's premise is pretty funny to begin with. It's worth waiting around for the celebrity cameo.

You'd be forgiven for thinking that garage door technology peaked somewhere around the time that Ronald Reagan was in the White House. Garage door openers are pretty simple, all things considered.

As it turns out, though, LiftMaster has taken the simple garage door opener a step further. To show off the technology, they've directed an ad featuring a famous face.

The ad starts out in a familiar setting – Cameron Frye's house from Ferris Bueller. Specifically, the garage.

The door opens to reveal a beautiful red E-Type Jaguar. A kid tells his friend that it's a 1966 and that "his dad spent three years restoring it." Hey, we've heard that before.

The actors and the car may be different, but otherwise, it's a faithful, shot-for-shot, line-for-line recreation of one of Ferris Bueller's Day Off's most memorable scenes. LiftMaster even licensed Yello's "Oh Yeah."

They stick to the established script right up until the Ferris Bueller stand-in says "It's his fault he didn't lock the garage." Then we see the LiftMaster garage door opener and its integrated camera.

We also hear a familiar voice offering a stern warning – "Don't even think about it!" The shot cuts to Alan Ruck, reprising his role as Cameron Frye, watching the events unfold on his cell phone.

"Been there, done that," he says, as what is revealed to be his son walks of with his friend. It's a fitting tribute to one of the greatest movies ever made, and it's also a pretty memorable ad for a slick new garage door opener.