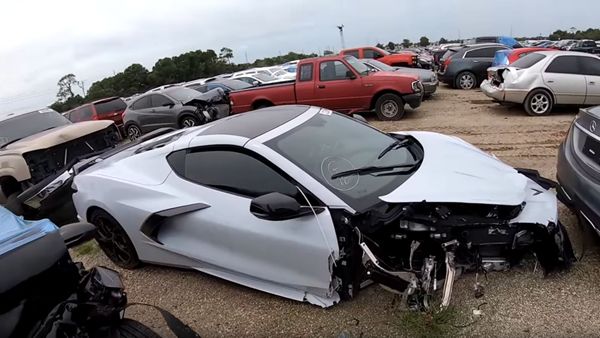 This video breaks it all down quickly.

Anytime a new performance vehicle creates a big stir it will also attract people who don’t know how to drive worth a damn. We’ve seen it with cars like the Shelby GT500, Dodge Hellcat, and even the new C8 Corvette. You might think these kinds of incidents are painful for the new car’s owner but you can profit off that by snatching the wrecked heap for peanuts, but you’re wrong. As we’ve seen, wrecked C8 Corvettes fetch top dollar and aren’t the screaming deal you’d expect. In fact, insurance auction expert and YouTuber Samcrac says you should just avoid them altogether.

We’ve heard of several wrecked C8 Corvettes, which is too bad considering how rare the 2020 models are, but Samcrac found two of them at the same insurance auction yard. That alone should indicate people are buying these who should probably be sticking to a Malibu or something equivalent.

Anyway, one of those C8s had just sold for $53,000. The front end is pretty badly damaged with one of the wheels ripped off the axle. That’s an insane price to pay, considering you could get a new one for close enough to the same amount.

There’s a possibility the one C8 was purchased by a Rob Wave fan. The rapper was the former owner of the ‘Vette and wrote a song about what happened. We haven’t listened to it but are assured it’s Grammy material. The video has 23 million views, showing that misfortune can also be fortune.

The second C8 has the Z51 package and 3LT trim. At first it doesn’t look bad at all, showing damage to the front bumper. But one rear wheel has been bent and the tire split, while the other rear wheel is absolutely demolished and the brake rotor on that side is also split. Samcrac says the ‘Vette would likely be easy to fix, but getting replacement parts could prove to make it a bad investment.

As an added bonus in the YouTube video, you get to see Samcrac go hunting through the auction for good finds. While he passes on the available C8, the guy does find a newer Mercedes-Benz S-Class most would pass off as done for but he says isn’t so bad. He also comes across a C7 that’s missing the roof and front end, but the drivetrain looks fine. There’s a custom C5 with front-end damage, which he thinks would be good to strip for parts. It also has a super sweet Z06 badge that would fool a lot of people. Anyway, check out the video for yourself.