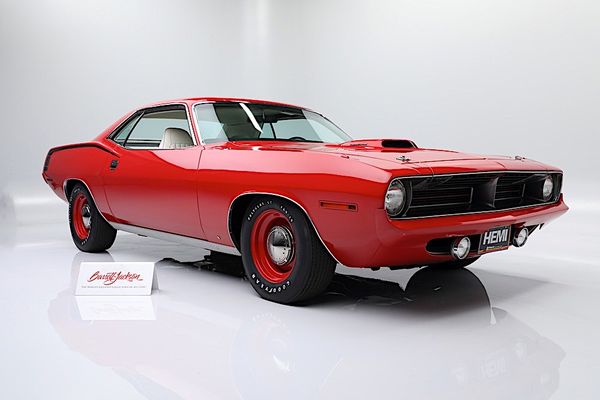 The 1960s and '70s were two decades that saw the influx of muscle and pony cars hit showroom floors brand new. Automakers battled it out by producing car that were attractive but also stuffed with raw big-block power to appeal to buyers just waiting to snatch them up. These days, many of these cars are worth big bucks and are more desired than ever before.

One of those cars was the Plymouth 'Cuda, a Barracuda in high-performance trim. The car was being offered online through the Barrett-Jackson auction this past July but failed to meet reserve and did not find a new home with any car collector. The '70 Hemi 'Cuda will be offered yet again as part of the Barrett-Jackson Fall Auction - WestWorld of Scottsdale, and this time with no reserve.

This 'Cuda was last registered in 1974, and in 2018 the car went under the knife for a complete restoration. The exterior is finished in a Rallye Red, and it features matching red wheels. A white leather interior sits behind the doors. Mechanically, this car was completely rebuilt to factory specs.

Not due to work recently performed on the car, this exceptional 'Cuda won Best of Show at Mopar Nationals back in 1998. With its current restoration and rare status, it could win several more awards and turn plenty of heads.

As mentioned above, this '70 Hemi 'Cuda will be offered yet again as part of the Barrett-Jackson Fall Auction - WestWorld of Scottsdale, and this time with no reserve.