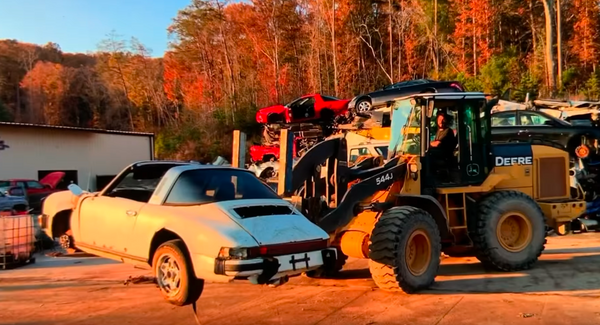 He also saved himself a small fortune but bit off a ton of work, too.

Being a car enthusiast  when you’re not rich and have responsibilities can be tough. This guy in  South Carolina is a boat mechanic and father of three, so he’s having  to turn to some creative ways to have a dream car. In the video below he snags a sweet 1974 Porsche 911 Targa for just $500. Actually, it’s really rough, and understandably so since  it came from a scrap yard. The big question is if doing such a thing is  genius or foolish?

Most people would absolutely lose it to find a Porsche 911 of any year, any model for a mere $500. That’s an incredible deal, even  if the engine is shot and the interior is non-existent, which isn’t too  far off from this ride. Michael Wagner, who made this video and bought  the car, has some plans for it like fitting the 911 Targa with a wider  body. That should make some of the damage negligible, but he definitely  has a long road ahead of him.

Ultimately, this Porsche 911 Targa is still a work in progress. The  guy has several more videos on his channel detailing the progress, but  it’s slow-going since he has a day job and other cars he’s trying to  resurrect. Still, there’s a lot he could do with this car, considering  it’s pretty much a blank slate at the moment.