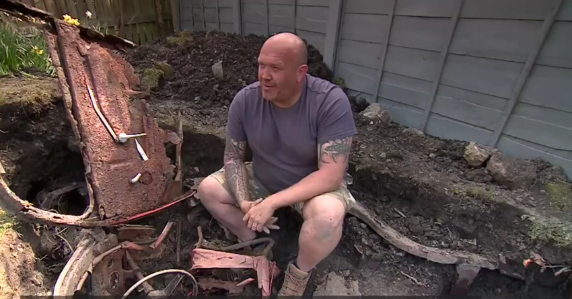 The speculation about how and why the car was buried there has finally been laid to rest.

Update: The mystery of the Ford Popular buried in a British man's backyard has finally been solved. After the news story spread, the former resident of the house stepped forward to explain he buried the car after mechanics told him it wasn't worth fixing. Instead of paying to have it scrapped, he buried it in the yard. That was in 1964.

Original Story: Imagine tending your backyard garden when you come across a part of an old car. That’s exactly what happened to a man in West Yorkshire, England recently. John Brayshaw has been tending to his plants to help pass the time while in coronavirus quarantine when he uncovered a huge mystery: an entombed Ford Popular.

Unfortunately, Brayshaw isn’t absolutely certain about the car’s identity. He also can’t get it out of the ground entirely as he lacks the heavy equipment necessary for such a large job. Still, he’s been able to uncover a fair amount of it.

The Ford was buried on its side, a move that would have required digging a shallower hole to cover it completely. A fair amount of metal has been eaten way over time, but enough of the car remains to give anyone a good idea of what it was.

Some of the original gray paint is still visible and Brayshaw has the registration plate with the numbers and letters all intact.

Whenever Brayshaw can get a crew with heavy machinery over to his house, they’re probably going to need to use extreme caution when extracting the Ford. Just like the cars we’ve seen pulled from watery graves, the overall structure can be so deteriorated that extraction is difficult.

The real question is why someone would bury the Ford. One theory is that the price of scrap steel was so low people had to pay to have it taken, so the owner might have decided burying the car was preferable. Of course, the possibility it was involved in a crime long ago is another theory being thrown around. Others think it might have been a military vehicle and was hidden for reasons unknown.

Ford produced the Popular, which the Brits lovingly refer to as the Pop, from 1953 to 1962. It was developed as a budget-friendly vehicle and so was quite popular during its run.