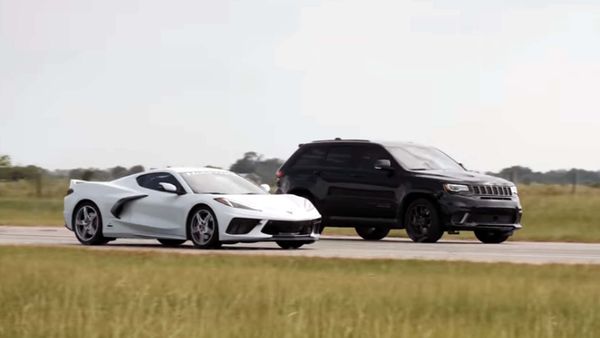 The C8 Corvette has proven to be a benchmark sports car in 2020 for both performance and value, which is why Hennessey Performance has released an almost-constant stream of videos showing the C8 drag racing a variety of cars from the Shelby GT500 to the Lamborghini Huracán. The latest videos from the Texas-based tuner have the mid-engine 'Vette taking on the Jeep Grand Cherokee Trackhawk – before and after a 1,000-horsepower transformation.

About a month ago, Hennessey showed a stock Grand Cherokee Trackhawk hitting the drag strip against a C8 that had been modified only with an aftermarket exhaust system. The supercharged Jeep might seem like it has the upper edge thanks to its 707-hp Hellcat Hemi going up against the 490-hp Chevy, but it also has a weight disadvantage tipping the scales at more than 5,300 pounds. Even with the extra weight, the Trackhawk still manages to put up a fair fight against the Corvette with a slight advantage off the line before succumbing to the C8's advanced performance.

Of course, this race was just a baseline run to see what the Jeep Grand Cherokee Trackhawk offers customers right off the showroom floor. A month later, the Jeep looks the same, but it shows up to the rematch with its 6.2-liter supercharged V8 tuned to produce an even 1,000 horsepower. Like the first race, the Jeep leaps to a quick lead, but the Corvette is never able to recover with half the horsepower. In the end, the Corvette gets gapped by almost the exact same amount that it served up to the Jeep in the baseline race.

If you had to choose between a 2020 Chevrolet Corvette Stingray and this Hennessey-tuned 1,000-hp Jeep Grand Cherokee Trackhawk, which would you buy?