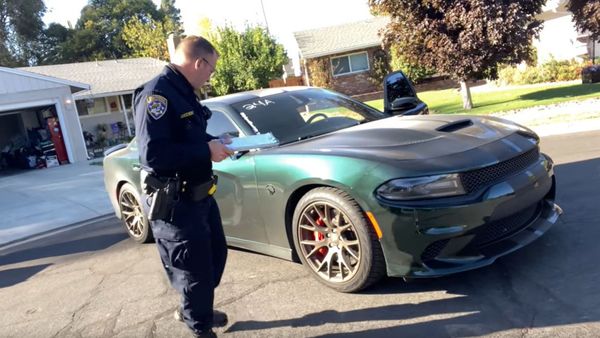 Do you think this is right?

YouTuber HelloooimJensen has accumulated over 44,000 subscribers with his crazy car videos. One of the main stars is his Dodge Charger Hellcat, which the guy likes to drift both on private property and on public roads. If you look at his channel, he’s had run-ins with the law in the past, but this time instead of just getting a warning or citation, the man’s Hellcat was impounded.

We don’t endorse what this guy does at all. In fact, we think he gives car enthusiasts a bad name. His videos show him drifting the Hellcat around other cars on public roads, and from the looks of things these aren’t people who are in on the stunt, so he’s putting innocent people in danger. The guy also likes to do smokey donuts in public intersections, similar to those street takeovers we’ve covered in the past. Something bad is going to happen one day and it could seriously injure or kill this kid or even worse someone who has nothing to do with his stupid decisions.

Some people have pointed out that this guy lives in California, where supposedly it’s really easy to apply to block off a section of a public road so you can race, drift, and do all kinds of other things that normally are illegal. We’re not sure if it’s really all that easy to do or if it’s economical since we don’t live there and have never investigated doing anything like that in the Golden State.

This kid got pulled over the day before for reckless driving while doing donuts on a public road. The cop was nice and didn’t take the car then, because he said that would mean the guy would’ve been arrested. With that evidence, the police got a search warrant and showed up and the Hellcat owner’s house early the next morning, then took the car away on a flatbed tow truck.

What really gets us is this guy doesn’t seem to have learned a lesson. He shows off a bunch of traffic citations in the video, so he’s obviously been in a lot of trouble. Everyone makes stupid decisions and you should learn from them. Instead of realizing he should find a legal way to have fun with his car, he’s whining and acting like a victim. Then he asks people to contribute to a fund to pay for his impound fees and many tickets.

If you want to skip to the police serving their warrant and impounding the car, go to 3:25 in the video and start watching from there. Otherwise, you can hear him whining about his problems he caused himself and justifying his actions, then see the cops take his Hellcat.