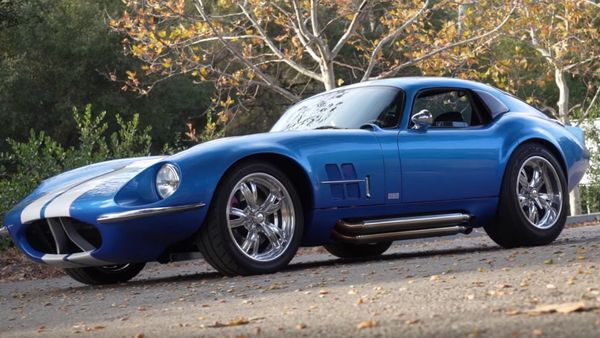 These days it seems like nobody has a sense of humor or can take any real criticism, but they sure can dish it out. In a recent article about Chip Foose sketching out an updated design for the DeLorean DMC-12, some readers took offense that I didn’t shower the man with compliments for his drawing. Apparently, they feel I just hate on everything Foose does, which is in actuality not the truth. Just to prove them wrong, I will give praise where it’s due with this Superformance Shelby Daytona which has been improved upon by Foose himself.

First of all, hats off to the man for not turning up his nose at a continuation model, like the project is somehow beneath him. I’ve never understood why people have that kind of attitude, except maybe the few well-heeled individuals who own original Shelbys and just want to show how superior they are.

It would be pretty hard to screw up a car as beautiful as the Shelby Daytona, but in a sketch maybe Foose would do just that. After all, when you’re just drawing something on paper it’s a great time to experiment and make mistakes – that’s one of the beauties of renderings. But when it comes to working with actual cars, Foose has a pretty good track record.

If you watch Overhaulin’, you might think this car looks familiar. It was featured on the show back in 2019. The changes to the car range from a gradient paint job to redesigned vents, and although many of them are subtle the overall effect is awesome.

This Superformance was originally designed by Peter Brock, the man who designed the Shelby Daytona back in the day. I’m sure Foose felt a reverence for it as a result, and he didn’t go wild with it. That might have also been at the direction of his client, but whatever forces were behind his work the result is indisputably beautiful.

Foose also addressed performance by dropping a Roush 427 Windsor V8 under the hood with 550-horsepower on tap. Bolted up to that is a custom Magnaflow exhaust. It sounds mean as hell and I’m sure it’s a blast from behind the wheel.

There you go: a car customized by Foose I love. I’m pretty sure if Chip Foose has run across any of my articles critiquing his work the man has lost zero sleep over it. You don’t rise to the top by getting bent out of shape because someone didn’t lavish you with praise.

Check out the video of this car to hear and see it in action.