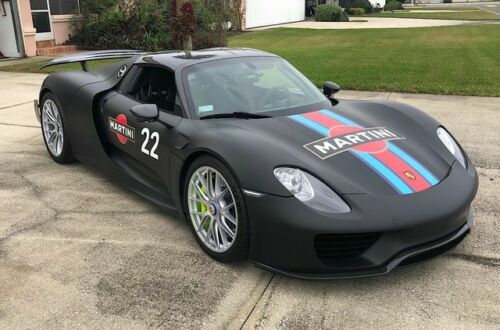 You need to be quick to grab this German supercar.

We’re always on the hunt for interesting cars and anyone you cut it, a Porsche 918 Spyder is interesting. Not only was it one of three hybrid supercars to debut at about the same time, demonstrating that hybrids didn’t need to be boring, the Porsche has remained relevant a decade after its reveal. That’s why this 2015 Porsche 918 Spyder Weissach listed for sale on eBay is compelling. Your chance to place a bid on this car is nearing the end, with the auction ending in a little over two hours as of the writing of this article.

The question is if you’d bid on it, and if so how much?

So far there are no bids on this Porsche, although there could be a few reasons fueling that. A Buy It Now price of $1,495,000 is pretty steep and in these uncertain times might seem downright insane, but there are people with that kind of money who would be interested in such an acquisition. The question is if any of them are looking at eBay today?

Despite having zero bids, there’s a lot going for this 918 Spyder. It has the highly lusty-worthy Weissach Package. Essentially, it helps lightweight the vehicle and was fitted to the car which ran the Nurburgring in a record-setting 6:57.

A matte black exterior (wrapped by the factory) over black interior is a tasteful combination many would like. Adding to the appeal of this supercar is the Martini livery, something which tugs at our sense of nostalgia. If you decide to change up the looks, underneath the wrap is a nice coat of Basalt Black which should be absolutely immaculate. This Porsche looks clean as you could want all the way around, and it should since the listing says there are a mere 2,900 miles on the odometer.

Still, some might be thinking the Buy It Now price is a little steep. Consider this: only 918 of these cars were made, and not all had the Weissach Package added. The dealer says MSRP on this supercar when new was $963,675 which sounds accurate. If you look at market values of this car in its claimed condition, this is priced pretty fairly.

Should you decide to go for this one, you’re going to need to act soon and don’t be surprised if others are holding back to see if anyone makes a move before the close of bidding.