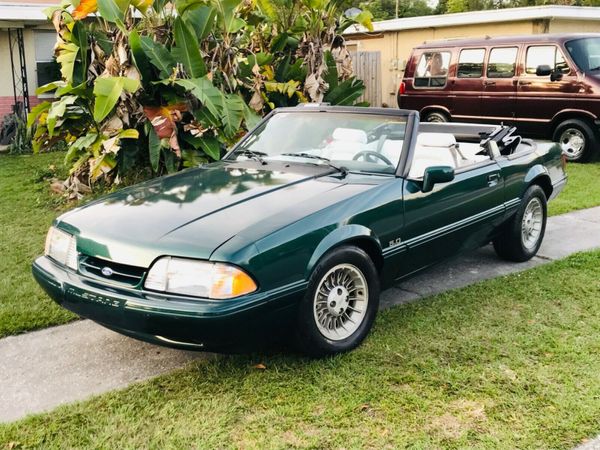 This special-edition Fox-body Mustang is looking for a new place to call home.

While browsing the internet's infinite car listings, we stumbled across one of the special-edition Fox-body Mustangs known as the 7-Up car on eBay. Those who are Mustang savvy, especially with the Fox-body era, can easily point out a Mustang 7-Up car. Each example was finished in Deep Emerald Green Clearcoat Metallic with a contrasting white convertible top and white leather interior. Other distinctive features included color-matched side mirrors, and body and fascia moldings along with 15-inch GT aluminum wheels. This 1990 Ford Mustang LX Convertible 7-Up Edition has 73,000 miles on the clock and is equipped with an automatic transmission. The seller states that the car appears in new condition, especially considering its age.

This special Ford Mustang many renewed parts due to the previous owner wanting the car to be in perfect condition. This specific car has a full Flowmaster exhaust and brand new tires that are wrapped around wheels in new condition. Included with the sale of the car is some history of the car in folders, two sets of original keys, a tonneau cover, a hood cover, and a complete car cover to protect it from any elements. The seller is welcoming any test drives.

A special-edition Ford Mustang came about thanks to a promotion by the 7-Up Bottling Company. Just thirty 1990 Ford Mustang LX convertibles were to be given away at the National Collegiate Athletic Association basketball finals to 30 people in attendance who could sink a ball from center court in just one try. While that sounds like a great way to take home a limited-edition car, the contest was canceled at the very last minute.

Two of the cars were built when production started in December of 1989. In February of 1990, production went into full swing and were produced as coupes but became convertibles when the hardtop was removed before shipment. While 5,000 of these cars were planned, only 4,103 were actually built and all examples were finished in Deep Emerald Green Clearcoat Metallic. A total of 1,360 of these Mustangs were equipped with a 5-speed manual transmission and 2,743 were automatics. A total of 261 of these cars were exported.

These 7-UP Fox-body Mustangs were stuffed with the 5.0-liter V8 engines with electronic fuel injection and capable of 225-rear-wheel-horsepower. Those who wanted more oomph out of their 7-UP Mustang could have an aftermarket supercharger installation by Steve Saleen. About a dozen cars took up the offer.

This 1990 Ford Mustang LX Convertible 7-Up Edition is located in Tampa but can be delivered anywhere in the United States. In the description, the seller says he would accept cash or a trade in the form of a boat, bike, RV, van, truck, or car. The VIN report has been included here, and he also included two YouTube videos of the car in the original listing, one you can view here. With 48 bids, the car is now at a $6,300 bid, but there is a reserve in place. Happy bidding!