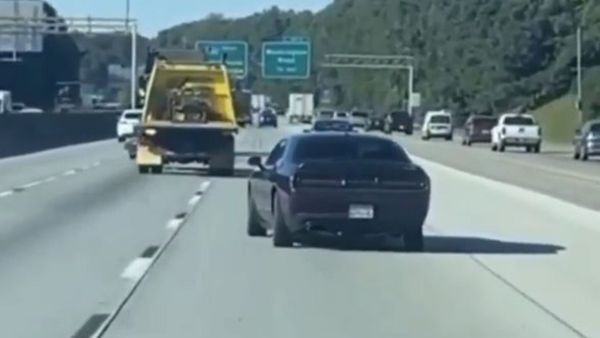 Usually, when you have serious damage on a car the best thing to do is call a tow truck and hire a professional to fix it. Sometimes people might risk driving the vehicle themselves, although we don’t recommend it. In the video posted to Instagram by account americanmusclehd, a modern Dodge Challenger was taken onto the highway even though it’s crabbing or dog tracking something fierce.

Copart has a collection of wrecked Dodges from drivers who took too much risk, see them here.

Just watching the video we wince in pain. It’s about as bad as the time I saw a woman in a Mustang (with California plates) trying to make it up a steep mountain pass in a snowstorm by pressing the accelerator all the way to the floor. Her rear tires were smoking as they uselessly spun on the icy road, her pony car going nowhere.

At least this Dodge Challenger is moving, but should it be? We’re taking a shot in the dark here by guessing frame damage is likely the cause, although it could be something else pretty serious. Driving a car with that kind of a problem at any speed, but especially over 55 mph is just asking for trouble in a big way.

This video was taken in the Atlanta area. We’re not going to judge all Georgians based on this, but what’s in those peaches these days?

The problem of cars crabbing or dog tracking certainly isn’t new, if you haven’t ever seen it before. A quick Google search will pull up all kinds of videos and photos showing Ford Explorers, Chevy Silverados, and other vehicles looking like they’re driving sideways. On vehicles with a live rear axle, it can be an issue of thrust angle.

But the modern Dodge Challenger has a five-link rear suspension, so that’s why we’re guessing this muscle car has some pretty serious frame damage. It could be an alignment problem, a really bad alignment problem. How could the driver not notice something is off?