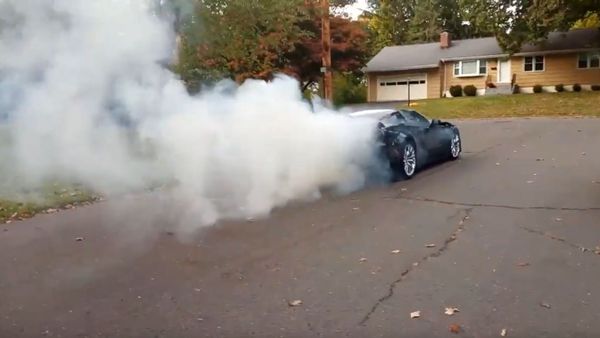 Yet another C7 Z06 driver trying to show off and failing miserably.

It wasn’t too long ago we covered a C7 Corvette Z06 trying to impress an S550 Mustang on a four-lane road. That story was controversial since some felt the Ford driver goaded the Chevy driver into racing, but the resulting crash was painful to watch. Now we have another example of a C7 Z06 driver trying to look cool and failing miserably, and no this isn’t us saying we hate Corvettes or Z06s or Chevrolets or whatever.

What this comes down to is just because you can afford a cool car doesn’t mean you’re a good driver. Plus, even the best drivers can make mistakes, although in this instance we don’t think that’s what happened at all.

In the brief video attached to this article, someone who thankfully doesn’t show their face has a sweet black C7 Corvette Z06 idling on what appears to be a residential street. That’s not the best place for a burnout, but we promise not a single person was injured or at any time in danger.

Instead, the poor Z06’s clutch took a roasting instead of the rear tires. The video clip only lasts 13 seconds, but in that time the clutch puts off an impressive amount of smoke, definitely more than the tires on a Honda Civic when it’s doing a burnout. Does the driver get points for that at least?

We have to hand it to whoever was behind the wheel of this Corvette Z06. They didn’t give up easily, but instead kept those revs up even though the tires weren’t spinning at all. That clutch should be roasted to crispy perfection, making a replacement job a necessary thing in the near future.

Call it a hunch, but we don’t think this video was uploaded by the Z06 owner. His buddy probably got a good laugh out of the whole thing, promised to delete the video, then accidentally passed it to someone else who uploaded it. There goes that friendship!