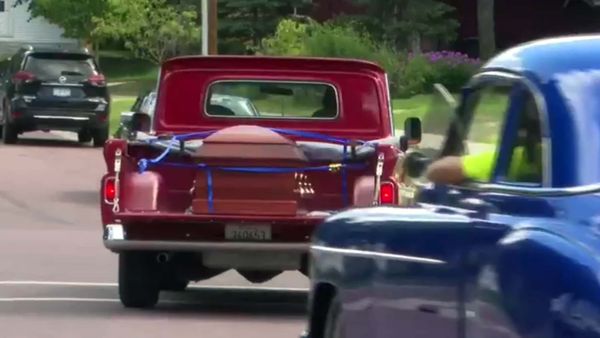 Probably how every classic car lover would like to go.

Over his lifetime, it's estimated that Phil Deegan owned 150 cars, and his home in Mankato, Minnesota is said to have always displayed an assortment of classic cars and trucks. So it makes total sense that after Deegan passed away on July 14, 2020, his funeral procession would be a rolling tribute to the automotive enthusiast. At the funeral service, a group of classic cars and trucks lined the church's parking, and this was followed by a procession of classic vehicles to the cemetery including a 1964-66 Chevy C10 that carried his coffin in the cargo bed.

In a video report from KEYC News, Deegan's son Dan said that his father "loved anything with wheels on it and anything with a motor in it," while his obituary shows an enthusiast who enjoyed collecting and restoring classic vehicles... including tractors. It went on to say that any time the weather was nice, Deegan would have his cars cleaned up to show them off in his front yard. Deegan died with family by his side, and he was even able to take one final ride in one of his cars just hours before passing away.

His funeral took place on July 21st, and family, friends and visitors were encouraged to bring their classic vehicles. The procession of cars ranged everywhere from hotrods to muscle cars and just about every type of classic car you could imagine including an old Ford dump truck. When it's your time to go, we couldn't think of a better way to be remembered.