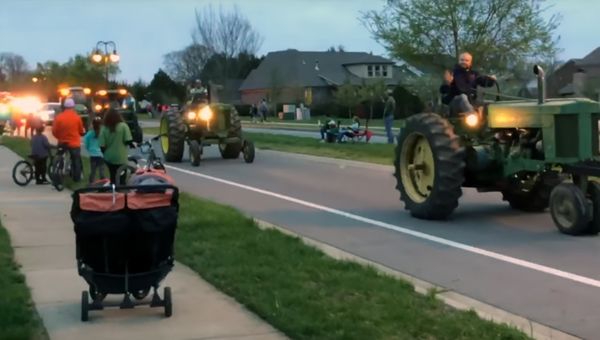 The country music star passed away from complications of Covid-19.

Grammy-award winning country music star, Joe Diffie, passed away on March 29, 2020 at the age of 61 from the coronavirus, and since no public services will be held due to the very disease that killed him, Diffie's fans honored his memory in the most fitting way possible. With hits that included "Pickup Man" and "John Deere Green," residents of Nolensville, Tennessee (where Diffie resided) paid tribute to Diffie with a parade of pickup trucks and John Deere tractors.

A video of the tribute parade was posted on STK's Adventure Channel, and the procession of vehicles is lead by a couple of vintage John Deere tractors – of course wearing the signature green paint job that Diffie sang about. There was more than a dozen vehicles in the parade including emergency vehicles and plenty of pickup trucks, and someone even had an inflatable screen set up on the side of the road showing pictures of the late singer.

Diffie's first album came out in 1990, and he remained active up until his death. He had five top hits in his career including two from 1994 –"Third Rock From The Sun" and "Pickup Man." The latter song was an anthem to pickup truck lovers! As for "John Deere Green," that song was released in 1993, and it peaked at number five.

Check out the official music video of Diffie's "Pickup Man" below: