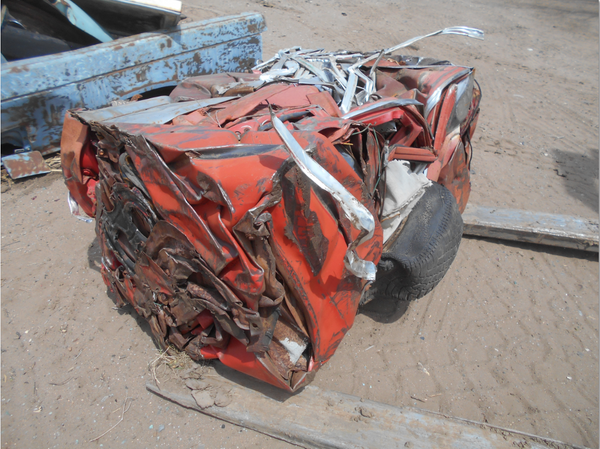 A 900-lb piece of artwork that pays tribute to the classic car's final moment in the 1983 horror movie by Stephen King.

For car enthusiasts and horror movie fanatics, the name 'Christine' brings up images of an evil red and white 1958 Plymouth Fury from the self-titled Stephen King movie. Plenty of these '58 Fury cars have been restored to appear like the infamous movie car, so this is an interesting take on the model. This eBay listing shows a cubed car that is a replica of Christine's final moment in the movie, a work of art by sculptor Timothy Stangohr.

According to the eBay description, Stangohr began the project by watching the final shots of the movie frame-by-frame. Here, the pieces that made up the cube in the movie were identified such as the red vehicle with bumpers sawed in two, a silver painted wheel complete with a tire, a grille, and trim moldings.

Wanting to know if the cubed car was actually a '58 Plymouth, the seller sought out old car collectors to get their opinion, but nobody could confirm. The crusher squeezes metal so tight that the car could not be properly identified. However, the wing-tipped bumpers were there, rare parts to source.

The seller started the project back in 2018. He started gathering the pieces for the art project with the first car being a beat-up and rusted 1962 Chevrolet. Locating a crusher that could cube the car was the hard part, as the cube-style crusher was popular over 30 years ago. Since then, the pancake crusher is most common. Maintenance was the only reason for this since less maintenance went into the latter since cube-style crushers need frequent adjustments and repairs. Upon some quick research, there was a cube crusher about 2 and a half hours from his location that was still operational. Turning the car into a cube was just a matter of throwing the body of the car along with the bumpers, wheels, and trim parts into the machine to be processed into the shape.

The cube came out as authentic as could be and was instantly recognizable. As some look at the cube, the little tune "Let's go, let's go, let's go little darlin'..." starts playing in their heads. Not a kinetic piece, the trim pieces still move and sway they did in the final scene of Christine.

From the description regarding the cubed Christine work of art:

"This sculpture piece stands alone as an art object. It shows the logical conclusion to a worn out consumer good. It is the cubed embodiment of our dead dreams in chrome and steel. It is as much a tribute to the film as it is a societal critique on our throwaway consumer culture."

This one-0f-a-kind work is the perfect piece for any fanatic of the horror film. It even comes with signed documentation by Stangohr.

According to Stangohr, the cube is huge and dense weighing about 900 lbs. Shipping can be arranged by local pickup. If interested, read the eBay listing and see how you can take this incredibly unique piece of art home for yourself.
The 'Buy It Now' price sits at US $2,900.00