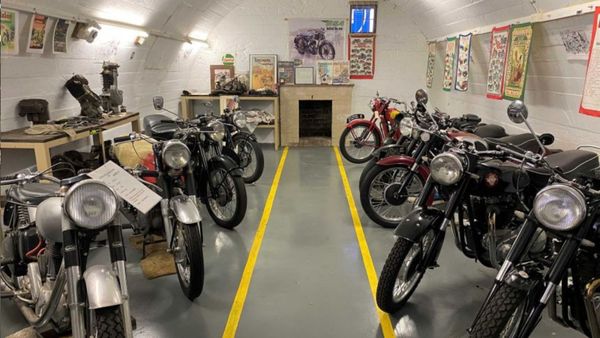 At least they’ll survive the apocalypse…

When you like to collect and restore vintage motorcycles, you need some extra space for your hobby. Most neighbors don’t want to see everything sprawled out on your porch, plus that might cause some tension with your significant other. A garage is an obvious place, but many times those are pretty cramped with cars and so on. If you happen to buy a property with an old bunker like Terry Germain did in Western Australia, it might make the perfect spot for working on and storing your bikes.

The man at first thought of the WWII-era bunker as a liability on his property, something he’d have to figure out how to remove and likely at great expense. However, the structure was made quite well and so is still in fantastic condition about 8 decades later. After all, it was constructed by the military to house communications in the region, so it was no doubt designed to take a blast or a few and still be left standing. Thankfully, it never had to withstand such a barrage.

At about 70 feet long with no excess moisture and plenty of lighting, it’s the perfect spot for storing the vintage motorcycles Germain works to restore. He has 31 motorcycles in there now, many of which he’s fully restored with plans to get to the others.

Among Germain’s collection is a 1916 Triumph. He has a few others which are over a century old, easily making them worthy of display in a museum, which might be where they end up one day. For now, they’re kept tucked away in a place few ever see. Germain is 87 but he doesn’t ride the motorcycles away from his property.

Many other vintage European models are part of Germain’s collection, including some Ducatis, Nortons, and Velocette. The man also has some American flavoring with a few Indians.