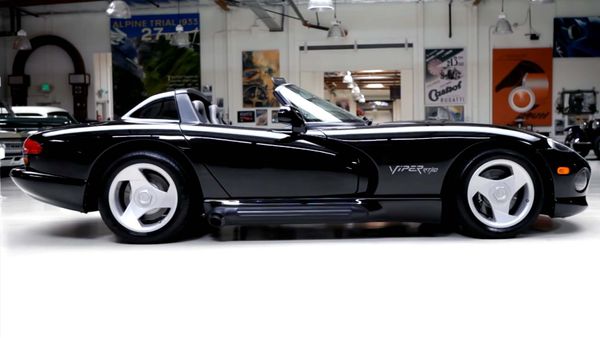 The car-loving comedian talks about watching his new Viper turn into a classic.

As COVID-19 continues to result in social distancing, shows we love have found new ways to keep us entertained. Rather than bring someone on his show to talk cars, Jay Leno's Garage now seems to be focusing on Jay Leno's personal vehicles, and this episode features the comedian's black 1993 Dodge Viper.

Leno bought this Viper brand new in 1993, and he's owned it ever since driving it less than 10,000 miles over 27 years. While the Viper looks as clean as it did when it was new, it has been slightly modified – by John Hennessey, no less – including an intake, exhaust and rear end gears. The 3.77 rear gears were done to improve acceleration... if you've never driven or ridden in an early Viper, these things already took off hard from the line.

As informative as this video is about the history and development of the Viper, the coolest part is hearing Leno's personal connection to the car. For starters, he admits to being caught up in the hype of the engine's 400-horsepower output, and he later proves that sometimes being a famous celebrity doesn't always get you what you want.

For the Viper's second model year, Dodge offered the car in black, and Leno wanted to get the very first '93 Viper in that color. Unfortunately, his friend and Viper designer, Tom Gale, also wanted this car, so Leno was stuck with black Viper number two instead. Of the 1,043 Vipers that were built in 1993, only 115 were painted black!

It is also interesting to note that Leno claims (or perhaps jokes) that the Viper's Conner Avenue Assembly plant is smaller than his "garage" – although the pre-1995 Vipers were actually built at the New Mack Assembly plant in Detroit.