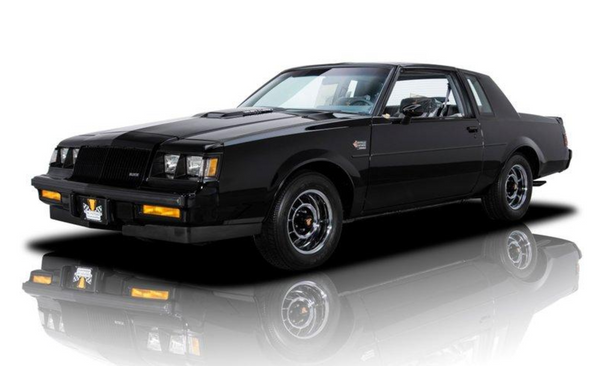 Place your bid on this two-owner all-original G-Body with just 105 miles.

Due to success in 1981 and 1982 after winning NASCAR's Manufacturer's Cups, Buick decided to debut a performance version of its Regal model and dubbed the Grand National. A G-body with a stealthy black exterior, the car became a hot commodity and is still a highly desired car today. In fact, it is probably many car enthusiasts' dream cars to come from the 1980s. This fine time capsule of a 1987 Buick Grand National only has 105 miles on the odometer and is listed in our Motorious May Muscle Cars Only Online Auction. If the Buick Grand National tops your dream car list, be sure to place your bid on this spectacular machine.

This '87 Grand National was sold brand new from the Terry Buick dealership of Poughkeepsie, New York, and has had only two owners over its lifespan thus far. The shiny original black paint (GM code 19U) sprayed inside the production factory is in perfect condition and is blanketed over the original sheet metal.

A car collector purchased the car, and it has barely set all four tires on the road. As mentioned above, the car has just 105 miles on the odometer and has been meticulously kept as a collector. A set of the factory chrome wheels come wrapped with Goodyear Eagle GT rubber (215/65R15).

Powering this '80s muscle car is the original Grand National's stalwart turbocharged 3.8-liter V6 engine that generated a factory 245-horsepower and 355 lb/ft of torque. Shifting power comes from the Turbo-Hydramatic 200R4 4-speed automatic transmission that spins a correct 10-bolt rear axle. Equipped with factory power steering, navigating those corners is simple, and a combination of disc and drum brakes bring everything to a halt.

Open the doors to an immaculate original gray and black interior that still features the plastic protective covering. Other interior highlights include power windows, power locks, climate control, cruise control, and a tilt steering wheel. Specific to the Grand National are the Lear Siegler seats with the driver being able to 6 ways through a power button. Factory gauges work flawlessly in the dashboard that is free of any warps or cracks, and your favorite tunes can be played through the Delco audio system. Even more, the factory console plays home to the factory shifter.

This stunning low-mileage 1987 Buick Grand National is a highly desired muscle car from the '80s, and this one is certainly a unicorn with just 105 miles that once belonged to the Colts Neck Collection. It is full of factory power, reliability, and is bound to turn heads if one should drive it instead of store it in another collection. The car comes with the original purchase invoice and agreement, a copy of the original manufacturer's statement of origin, original window sticker and the dealer addendum (on the glass).

This highly coveted, low-mileage unicorn of a 1987 Buick Grand National is being auctioned off through our Motorious May Muscle Cars Only Online Auction at this time, so feel free to visit the auction and register to bid so you can wake up to this beauty in the garage everyday. RK Motors is the seller, and this gem is guaranteed to bring plenty of joy despite it finally enjoying some road time or sitting in another collection.