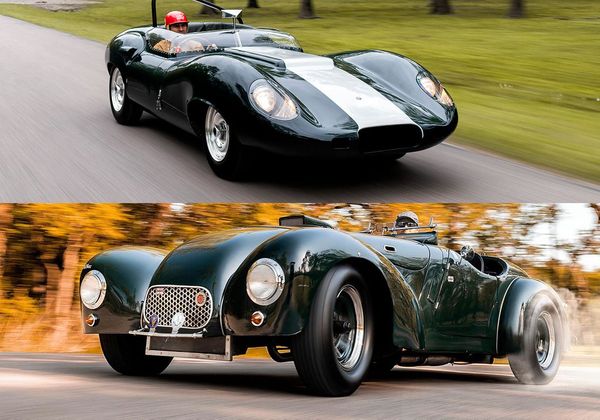 Both cars are right-hand-drive, have an open cockpit, finished in British Racing Green, and have plenty of racing history.

Car auctions usually feature a diverse selection of cars ranging from modern mash-ups to vintage racers and everything in between. Here we have two cars, a 1946 Allard K1 with plenty of racing history and a Lister-Jaguar Costin Tribute built by Tempero that also has quite a bit of track time under its belt. Both right-hand-drive and British Racing Green with an open cockpit, both of these cars were built to carve those apexes. If you were to choose between one of the two, which one would you pick?

Both of these cars are in the Bring A Trailer's DriverSource's Spring Motoring Collection auction.

This right-hand-drive 1946 Allard K1 was raced in the late-1990s and early-2000s in Danbury, Connecticut, and made its way to race with the VSCCA and VRG on the East Coast after that. This Allard K1 is part of Bring A Trailer's DriverSource's Spring Motoring Collection and has a current bid of $30,000 with two days left.

Powering the '46 Allard K1 is a Cadillac 390-cubic-inch V8 engine that was rebuilt in 2008 and is backed by a 4-speed Richmond T-10 Transmission that twists a Ford 9-inch rear end. Highlights include the nitrided crankshaft, Edmunds intake manifold, JE pistons, forged connecting rods, dual Holley carburetors, a high-torque starter, and a Moroso electrical cutoff switch. Suspension consists of a swing-axle setup that includes coil springs up front and transverse leaf spring and radius rods in the back. Front brakes come from a late-1940s Lincoln, and Ford drums can be found on the solid rear end. Custom exhaust headers were fabricated by GMT Racing in 2000 and send spent gases through a dual side-outlet exhaust setup. Work performed on the car this year includes a tune-up and detailing, a new clutch, spark plugs, and fluids.

Made of aluminum, this K1 sits over a boxed ladder frame and has a 106-inch wheelbase. This example left the factory sprayed in red, but the car is now a British Racing Green, a hue applied in the late 1940s. More exterior highlights include matching steel wheels with chrome trim rings wrapped with Dunlop Racing rubber, leather hood strap, spare tire covet, and a full-length Brooklands-style windscreens. The car also has a black soft top, side curtains, and a bolt-in roll bar.
Inside, the cockpit is right-hand-drive and has black bucket seats with matching door panels and G-Force lap belts. A wood dash spans the interior which houses an instrument panel including an AutoMeter tachometer, VDO voltmeter, and an oil pressure gauge. Also, the car has a period lap-timer, Sunpro water temperature gauge, and a Fuel Safe fuel-level indicator.

This 1946 Allard K1 is part of Bring A Trailer's DriverSource's Spring Motoring Collection and has a current bid of $30,000 with two days left. The sale of the car comes with VSCCA logbooks, two binders full of documents that date back to the 1990s, invoices from GMT Racing that total over $40k, and a clean Texas title.

Back in the 1950s, Jaguar was incredibly successful in the world of motorsports. During that decade, the British automaker won the 24 Hours of Le Mans race five different times with its C-Types and D-Types racer models. While this particular tribute example was built in the 1980s, the Lister Motor Company built competition cars in the late 1950s that revolved around the Jaguar XK engine. Aerodynamicist Frank Costin was hired in 1959 to design the bodywork for the cars. Here we have a Lister-Jaguar Costin Tribute car as part of the Bring A Trailer's DriverSource's Spring Motoring Collection.

Back in the mid-1980s, this Lister-Jaguar Costin tribute was built in New Zealand by the Tempero Coach & Motor Company. There, the car was raced in the '90s in hillclimbs and road races, but it was refurbished after it made its way back to Tempero. A Jaguar collector in the United States named Terry Larson had it imported and put on display in Las Vegas at the Imperial Palace.

Originally painted blue, this car is equipped with an aluminum body that has been resprayed in British Racing Green and topped with a white stripe back in the '90s. More exterior highlights include a rear decklid with louvers, roll hoop, side-exit exhaust, covered headlamps, outside hood latches, knock-off 15-inch Dunlop wheels wrapped with Pirelli Cinturato tires, and a polished fuel-filler cap.

Tucked in the engine bay is a 4.2-liter XK inline-six topped with triple Dell'Orto carburetors and power is shifted down to the rear wheels via a 5-speed manual transmission in conjunction with a Tilton clutch. Stopping is provided by four-wheel disc brakes, and handling is on point thanks to an independent rear suspension. A rear sway bar and low-mounted fuel tank were added back in 1993.

Another right-hand-drive example, the cockpit of this car features green leather upholstery on the seats as well as the transmission tunnel. Everything else is simplistic on this car, titled as a 1959 Jaguar. The dashboard houses gauges including a Smiths tachometer and a 140-mph speedometer, oil pressure, water temperature, and a Lucas ammeter. The 5-digit speedometer shows 73,000 miles.

Here we have a Lister-Jaguar Costin Tribute car as part of the Bring A Trailer's DriverSource's Spring Motoring Collection. The car comes with a clean Texas title, a Tempero brochure, dyno sheet, records going back to the '90s, $40k in receipts from GMT Racing, two VSCCA logbooks, a spare wheel and jack. This tribute car sold for $75,500 on May 18th.

These two vintage cars, both painted British Racing Green and plenty of racing history that dates back decades, are both a force to be reckoned with on the track. If you were to choose, which one would you pick?