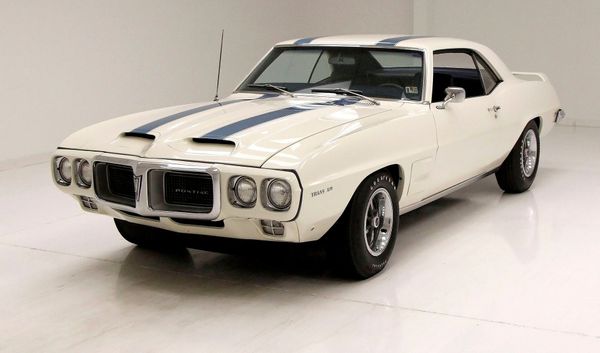 Coming into the “golden era” of the SCCAs Trans-American Championship racing series, auto manufacturers and racers alike went to great extents to dominate the track. Pontiac was no exception. Going as far as to create a new engine that complied with the SCCA's 5.0-liter or less guideline for use in a specially optioned Firebird bearing the name of the series itself, Pontiacs efforts unfortunately did not pay off in the race series. However, for enthusiasts that longed for a Firebird with more power, better handling, and unmistakable style, Pontiac struck gold creating the American icon known as the Trans Am.

Despite being the first of the moniker that would develop a cult like following of enthusiasts for the Pontiac Firebird, the Trans Am got off to a slow start and only 697 were produced and 8 of those were convertibles. Over 50 years later the remaining 689 iconic blue and white coupes have become increasingly hard to find, especially the few all matching numbers originals left. Classic Auto Mall is offering a 2 owner 1969 Trans Am with an original 83,979 miles for just under $114,000.

This car has been preserved very well and has been repainted in the correct Cameo White with blue strips and rear panel. The interior appears to be original rather than redone and will take you back in time with the working original radio. Under the dual Ram Air hood sits the original matching numbers Pontiac 400 cid Ram Air III mated topped with a Rochester Quadra-jet 4-barrel carburetor and backed by a numbers matching TH400 3-speed automatic. This is a very rare opportunity to snag one of the last remaining first of the breed in a condition that you would expect from a car with less than a 100,000 miles on the clock.