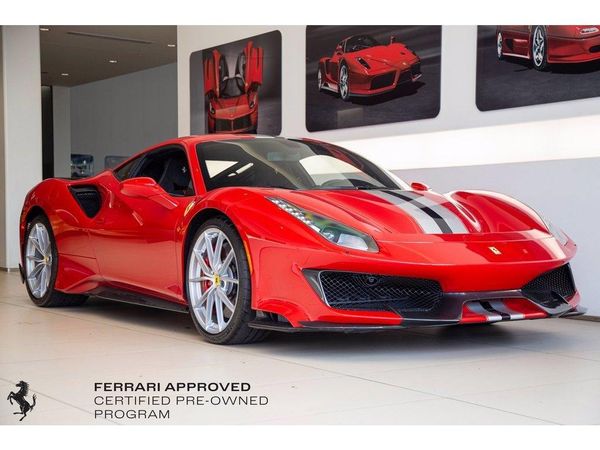 With more downforce, more power, and more capability than the car that TopGear  named "The Supercar of the Year 2015", the Ferrari 488 Pista blurs the lines between supercar and halo car. As a close descendant of the 488 GTB, the 488 Pista uses the cars 710-horsepower 3.9-liter twin-turbocharged V8 engine to rocket from a standstill to 124-mph in just 7.6-seconds. Its front 41.5-percent to rear 58.5-percent weight distribution gives the car an edge in the corners and the magnetorheological suspension increases the car's stability at high speeds. Just because the 488 Pista enjoys being driven like a racecar doesn’t mean it has to be. In fact, it is incredibly road friendly and the interior is more comfortable and comes with more amenities than what you would expect from a car this capable.

Ron Tonkin Gran Turismo is offering Ferrari buyers the opportunity to own a prime 2020 example of the 488 Pista through its Ferrari Approved Certified Pre-Owned Program. This particular car is finished in Rosso Corsa with an Argento Nurburgring and dark blue PNT3 exterior stripe and exposed carbon fiber accents. A set of 20-inch forged wheels and red brake calipers put the finishing touches on the car's exterior.

A Blu Scuro Alcantara upholstery is accented with Rosso Ferrari detailing and special Grigio Chiaro contrast stitching. While the seats are technically racing racing seats, they are equipped with a lifter feature. Adaptive headlights, a parking camera, a radio and navigation system with Bluetooth connectivity, and a heat insulated windshield are among the interiors many features. A suspension lifter system improves drivability on the street and Scrape Armour and paint protective film was installed prior to original delivery. This is an awesome example with many upgrades being offered by the oldest Ferrari dealership in North America and Ferrari Financial Services can make it easy for you to get behind the wheel of this dream car.