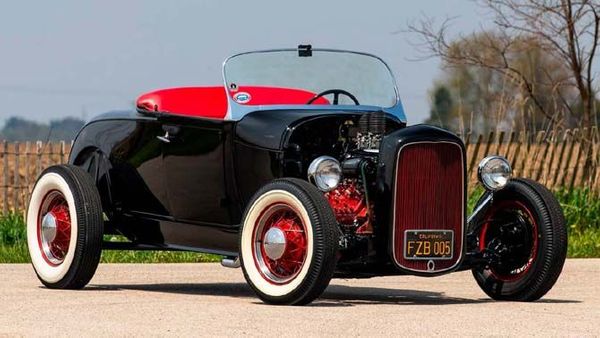 Driven by Elvis in the 1957 film Loving You.

Elvis Presley owned a variety of cars, trucks, motorcycles and limousines, but one car he never owned was John Athan's custom Ford Roadster. Not only is this Ford historically significant among hot rods, it was also driven by "The King" in the 1957 movie Loving You, and now it's going up for auction through Mecum in July.

Athan built this Ford Roadster in 1937, and it is considered the first such hotrod to put a Ford Model A body on top of a 1932 Ford chassis. Other touches that helped inspire the hotrod movement include the exposed V8 engine, the use of drop axles and the removal of the fenders and running boards. As restrained as this car looks compared to hotrods that came after it, this Ford is incredibly custom right down windshield that was fabricated from the rear window of a Chrysler.

Of course, this car's biggest claim to fame is that Elvis drove it in his first leading role as an actor. The legend behind the hotrod states that after filming, Elvis tried on several occasions to purchase it, and each time Athan refused. Athan had the Ford restored in 1998, and he kept it until he died 2016. After his death, his family kept the car until 2019. Due to its involvement in movie, music and automotive culture, Athan's custom 1929/32 Ford Roadster has been on display at the Smithsonian Museum, Wally Parks NHRA Museum and the Petersen Museum.

Mecum's Indy 2020 auction runs from July 10-18, and this hotrod legend will be up for grabs on Saturday, July 11. Be sure you're registered to bid for a chance at owning an incredibly important hotrod with direct ties to Elvis Presley.