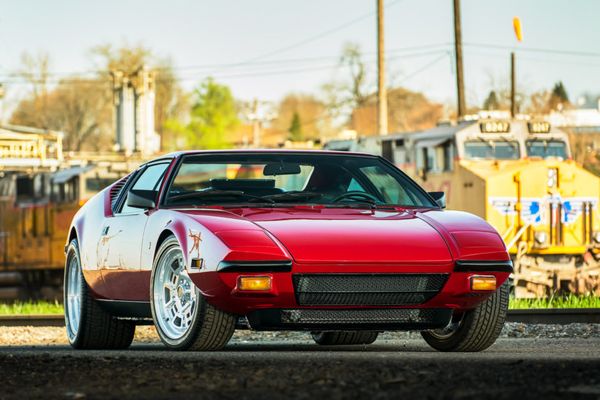 The current owner has done everything right with this Italian stallion.

There’s no denying the Pantera is one of the more intriguing cars to come out of the 1970s. A true Italian-American hybrid, the mid-engined wonder is a bit of an oddity. Many have been modified to address certain innate issues in their design, but this 1974 De Tomaso Pantera features plenty of performance enhancements, pushing the car to new heights.

If you think this Pantera looks familiar, you might actually be correct. It has been featured in publications before and has drawn plenty of attention. Seeing why isn’t difficult since it combines beauty and brawn eloquently.

Instead of sticking with the stock Ford 335 Cleveland V8, the owner decided to go bigger. Now, the De Tomaso uses a 427 V8 built by Blood Enterprises, featuring an aluminum block and heads as well as a 950CFM carb. After being built, this burly V8 was whipping out a nice 460-horsepower on the dyno, so you’ll definitely feel the difference. Backing up the engine is a rebuilt five-speed ZF transmission and a limited-slip differential.

True performance is all about balance, not unchecked power. To achieve this, the owner outfitted the Pantera with four-piston Wilwood brake calipers. They grip vented discs. Wrapped around the 17-inch Marino Perna wheels are Pirelli P Zero Asimmetrico tires, increasing handling, acceleration, and stopping performance.

On the beauty side of things, this Pantera was refreshed thoroughly. It all started with the body being stripped to the metal back in the 1990s. Before it was refinished in the red PPG two-stage enamel you see now, this car was fitted with a Precision Pro-Formance Chassis Rigidity Kit, boosting handling considerably. Boosting aesthetics further was the replacement of the factory bumpers with Pre-L bumperettes which accentuate the body curves better. A quad-outlet exhaust system also gives a more aggressive look to the back end.

Even the interior of this car is plush, thanks to black leather upholstery and Wilton wool carpets. It even features wood trim in the dash and door panels. There’s little doubt this De Tomaso Pantera is not going to last long at auction, so if you want it you’ll need to bid now.