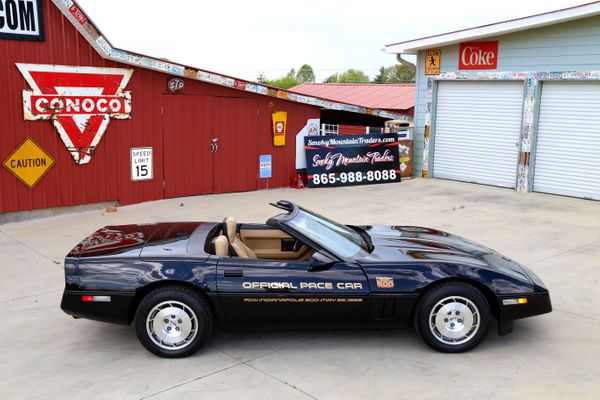 Not all 1986 Corvette pace cars were yellow.

While most pace car replicas come in just a single paint scheme, the entire production run of 1986 Chevrolet Corvette convertibles were essentially considered to be the Indy 500 pace car editions. This meant that while the iconic yellow drop top driven by Chuck Yeager is often considered to be the official pace car, all 1986 Corvette convertibles – including this black, low-mileage example – came with the exterior decal package and interior dash plaque.

Not only did the 1986 model year represent the Corvette's second appearance as a pace car after the 1978, it also marked the return of the Corvette convertible for the first time since 1975. More than 7,000 Corvette convertibles were produced in 1986, but according to pacecarregistry.com, only the convertibles with the VIN sequence 01267 and lower were the actual track cars – this car's VIN ends in 01160. This car is a treasure trove of Corvette history!

On the outside, the black paint job looks flawless thanks to the fact that this Corvette has less than 36,000 actual miles, and the gold Indy 500 lettering perfectly ties in with the convertible's saddle-colored leather interior. Everywhere you look, you'll be impressed with the overall quality of this car from the crack-free bumpers to the scratch-free wheels, and that also goes for the spotless engine compartment. That's where you'll find the 350 cubic-inch V8 paired to the Doug Nash 4+3 manual transmission.

This low-mileage 1986 Chevrolet Corvette convertible looks absolutely stunning, and it's up for sale through Smoky Mountain Traders. It's currently listed for $14,995, but you can click HERE to make an offer.