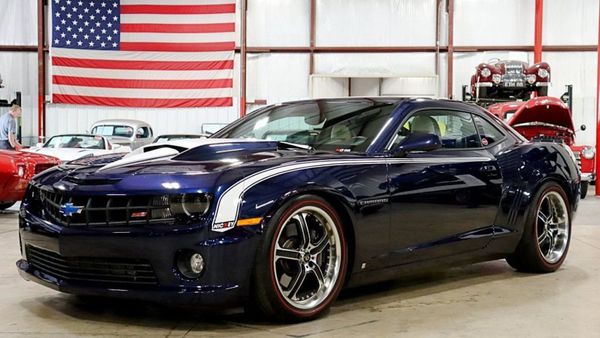 Your neighbors will absolutely love you for getting this muscle car.

Even with its inherent weaknesses, the modern Chevy Camaro is still a solid if not exceptional muscle car. People might debate that, but it’s especially true after NicKey Performance gets its hands on one, doing what it’s done best for decades: making it even better. And now you have a chance to understand that firsthand.

In case you don’t know, NicKey is known as the “Original Super Car Headquarters.” It’s a hallowed name in the muscle car world. Starting off as a Chevrolet dealer way back in 1925, it has since become one of the largest and most respected high-performance shops around.

NicKey has a long history with the Chevy Camaro, being the first shop to throw a 427 under the hood of the car. The company offers upgrades for muscle cars in Stage I, Stage II, and Stage III configurations. This particular 2010 Camaro SS has the Stage II upgrades installed.

There are some more cosmetic upgrades, because it makes this Camaro that much more custom-feeling. Hockey stripes with the NicKey name are the most obvious, but there’s also a Ebony/White custom leather interior with the NicKey logo embroidered on the headrests, a painted engine cover, and even a customer ID plate.

Originally, this Camaro was a 2SS with the RS Package, so it was a respectable muscle car with some nice features out of the factory. It has an Imperial Blue Metallic exterior and only 9,836 miles on the clock.

Unique, professionally-tuned modern muscle cars like this 2010 Chevrolet Camaro SS by NicKey Performance don’t usually last too long on the market. If you want a shot at this, contact GR Auto Gallery.