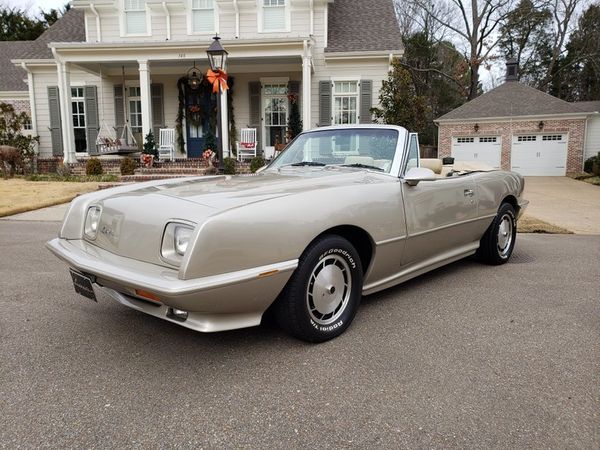 An elegant drop top with less than 21,000 miles on the clock.

When the Avanti was introduced by Studebaker back in 1962, the car had a distinctive appearance that was way ahead of its time. Art & Speed is excited to offer the perfect chance to take home this stunning piece of art - an absolutely stunning 1989 Avanti convertible.

Finished in a pristine Champagne Mist over a Beige leather interior, this Avanti example looks like an elegant rolling piece of artwork. However, it hasn't been shown off on the road too much with less than 21,000 miles on the ticker. The tan convertible top still looks brand new. Elegance continues throughout the inside with wood surrounding the dashboard and console. Power comes from a 305-cubic-inch V8 engine with power shifted to the rear wheels via a 4-speed automatic transmission. The '89 Avanti is rated at 170-horsepower and 250 lb/ft of torque.

Back in 1962, Studebaker introduced its new cutting-edge Avanti, a car that appeared way ahead of its time. Unfortunately, the decision was made to shut down Studebaker's South Bend factory the following year in 1963. Initially, production continued on the Avanti using remnant unused Studebaker parts. Avanti Motor Company would eventually take over and use the well-known chassis and engines from two of America's largest automakers - Ford Motor Company and General Motors.

The Avanti's design and name passed through five different owners from 1965 through 2006. A man named John Cafaro acquired Avanti in 1987. With some financial help from the State of Ohio, Avanti production was moved from its birth spot in South Bend and relocated to Youngstown, Ohio. For 1988 and 1989, two-door coupes and a convertible were produced, and the '88 model was called the "Silver Year" as it marked the 25th anniversary of the namesake. In 1989, Cafaro decided to build a four-door sedan after losing confidence in the two-door coupe. The public was disinterested and only 90 sedans were made total. Soon after, the Youngstown plant closed its doors in 1991 after four years and 405 cars produced. This shining example here was built during Carafo's short-lived ownership.

If rolling in rare style is your thing, this elegant 1989 Avanti Convertible would make the perfect cruiser. While luxury cars can be found everywhere, seeing another Avanti cruising through town is a rare sight. Be the talk of the town in this stylish cruiser. This car is listed at $32,900, but feel free to contact Art & Speed today and submit an offer.