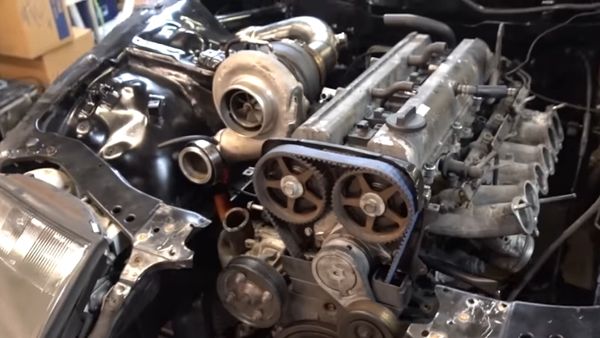 Learn from one man’s trials and tribulations to make the ultimate Nissan 300ZX.

Many people fantasize about swapping a 2JZ engine, the one from the Toyota Supra, into their build. After all, the engine was famously overbuilt by Toyota so it can handle amazing power increases, becoming a monster without doing a complete rebuild. Perhaps that’s why this guy named Jared from YouTube channel Wrench Every Day slapped one in a Nissan 300ZX. What he found out was the swap became far harder than imagined.

Engine swaps are usually not entirely straightforward, especially when you’re slapping in something from another brand. You have to be a brave about drilling additional holes and doing other things that could easily result in disaster, which is how this process starts as the transmission and engine block need additional bolts.

I know what anyone who’s started watching the video is thinking: this Jared guy is an idiot. After all he tries pouring oil into the engine without using a funnel and spills it all over. What kind of monster does that? Keep watching, because he’s actually not that dumb, we swear.

It’s actually pretty interesting to see Jared work as he makes different changes to get things to line up correctly as so on. For example, modifying the exhaust manifold to avoid boost creep is a wise move. Think maybe he’s had a turbo car blow up on the track before?

There are many, many details to this build and Jared doesn’t even get through them all. But if you’re considering a 2JZ swap this video could be informative. Otherwise, it’s just some solid entertainment while you fantasize about doing a swap.

Despite the troubles, we’ve gotta give some credit to this Jared guy. It’s not easy posting video of you working on your car for the whole internets to see. There are many armchair admirals and Sunday quarterbacks who love to explain how dumb everyone else is. We all make mistakes when we push beyond our limits, but that’s also how you learn. Hopefully you’ll learn something from Jared’s mistakes.