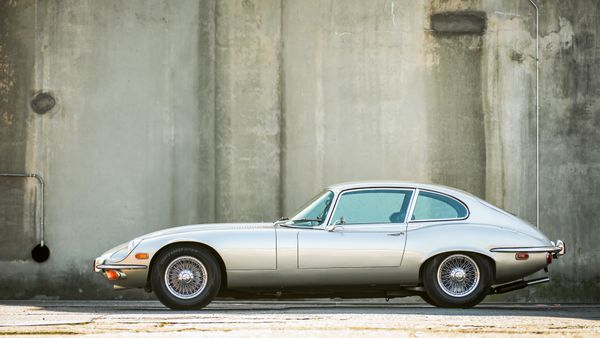 Is there a classic car that is more timeless than the Jaguar E-Type? We think not.

From its long hood to its sloping, fastback roof, the Jaguar E-Type is one of the most recognizable cars ever built, which makes it no surprise these cars are so popular among collectors. This silver 1971 Jaguar E-Type 2+2 Series 3 is a flawless display of this car's timeless beauty and performance, and it was up for grabs on Bring a Trailer recently. That auction ended on April 7th, and this pretty kitty found a new home with a winning bid of $47,750.

According to the listing, this Jaguar was purchased in Portland, Oregon, and it stayed with its original owner for almost 30 years. From there, it appears to have had just two owners since, and it joined the collection of its current owner and seller in 2010. That limited ownership means this car has a well-documented history including early repairs and registration, and it's also been well cared for as proven by how clean and straight this car is. Although it's not being listed as original miles, the overall condition of this car would suggest that the 40,000 miles currently showing on the odometer could very well be all the driving this car has ever seen.

What makes the E-Type's design so beautiful is the exaggerated proportions with the long, forward-tilting hood and the roofline that slopes back to meet the trailing edge of the arched rear fenders. You usually see these E-Types in brighter colors or even the iconic British Racing Green, but this one looks just as good in a repainted shade of its original silver hue. The inside of this Jag is just as clean, too, with the 49-year-old 2+2 coupe showing only minimal amounts of wear.

This 1971 Jaguar E-Type represents the first year for the Series 3 E-Type, which is recognizable by the larger side marker lights, the egg-crate grille and, of course, is the 5.3-liter V12 under that mile-long hood. In reality, the Series 3's 272-horsepower V12 was only slightly more powerful than the straight-six engines used in the Series 1 and Series 2, but this engine has the size and cylinder count to match the E-Type's ostentatious design.

The sub-$48,000 sale price for this automotive icon means that these cars are still attainable at modest prices, which is good news for Jaguar enthusiasts.

More From Bring A Trailer...