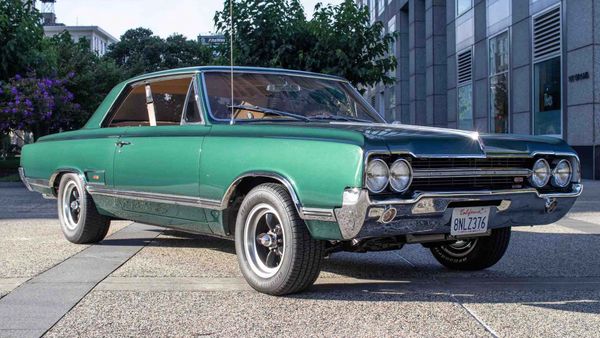 It's not often that a car labeled as a restomod also gets to boast a status of mostly original, but that's exactly the unique situation of this 1965 Oldsmobile Cutlass 4-4-2 being auctioned off through The Driven Exchange. Everything about this classic muscle car seems to suggest it's a stock 442, and while it definitely underwent a high-quality rotisserie restoration, this build is ready to cruise thanks to some hidden restomod upgrades.

Those upgrades start under the hood, but not exactly how you might think. Instead of swapping out the factory engine with something bigger, this 442's numbers-matching engine was rebuilt and upgraded with aftermarket fuel injection and air conditioning. This engine uses a fully custom dual exhaust system that still manages to mount to the factory hangers and use factory outlets, and shifting duty is performed through a four-speed manual transmission – that is what the second "4" in 4-4-2 stands for after all! The only major clue that this Oldsmobile has been restomodded is the four-wheel power disc brakes with drilled and slotted rotors that peek out from the period-correct American Racing five-spoke wheels.

In terms of style, it'll be hard finding a 1965 Oldsmobile 442 that is cleaner than this one: outside, inside and underneath. While it no longer features the original paint color, this car's Forest Mist paint job was a factory-available color on the '65 Cutlass. The inside is even cleaner with even the smallest detail being refinished for a brand-new look in this 55-year-old muscle car. The original seats were redone for this restoration, but everything looks factory fresh with the crown jewel being the wood-rimmed, three-spoke steering wheel.

This 1965 Oldsmobile Cutlass 4-4-2 will be up for auction through August 6th, so be sure you're registered to bid for a shot at owning a low-key restomod.