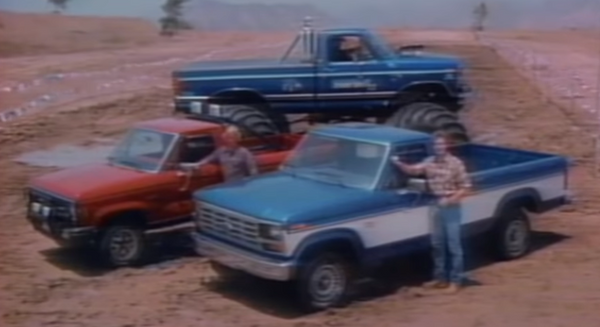 This was back when TV was great and trucks were simple.

Back in the 1980s people bought trucks because they wanted to get things done. No pickups were luxury cruisers, whether they were Fords, Chevrolets, GMCs, Dodges, Toyotas, Datsuns, etc. Instead of heated and ventilated leather seats, open-pore wood trim, and chrome tailgates, trucks were beasts of burden. That’s definitely reflected in the series of 1980s Ford truck commercials below.

We get to see the Ford F-150, Ford Bronco, and Ford Ranger in all their glory. The automaker turned to some really entertaining methods to show off what its trucks could do, like dropping a Ranger out of an airplane. Do you see commercials like this today? No and it’s too bad.

The F-150 gets plenty of punishment in creative ways for these commercials. One does a barrel roll into a pit with some heavy-duty netting to catch it. Another is hoisted up by a crane and dropped 10 or so feet. One climbs a mountain made of loose cinder blocks and another conquers one composed of loose timbers. That’s pretty creative.

At one point Ford stacks up its different truck models using a crane. It’s almost like automotive Jenga. Why don’t they make commercials like this anymore?

Ford even brags about gas mileage for its trucks using big signs. Red and black letters on white make it easy to see just how little fuel they’ll be using, at least the estimated amount, as you watch the Ranger and F-150 perform all kinds of stunts.

Perhaps the most surprising is the commercial for Ford commercial cab-over-engine trucks. When you think of 80s Ford trucks, the CL9000 probably isn’t in the picture at all.

Chevy and Mopar fans can watch the video as well because it’s an interesting blast from the past. You don’t have to tell anyone about it so there’s no shame.