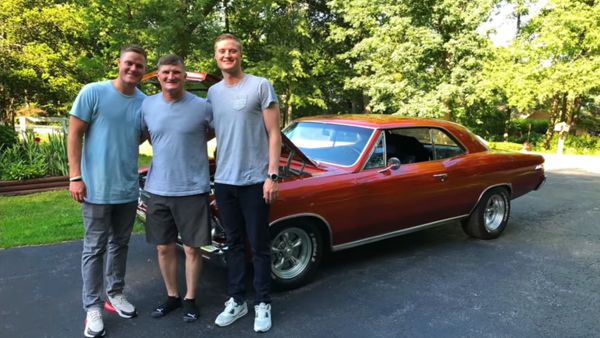 Talk about a nice surprise!

Being a parent can sometimes turn out to be a thankless job. Oftentimes you’re bugging your kids to get their homework done, clean their rooms, wash the dishes, stop eating dirt, say please and thank you, stop reaching over others at the table, and other things they don’t want to hear. However, children grow up and hopefully mature enough to realize all that you’ve done for them, if you’re indeed a good parent (and we hope you are). That’s when they express appreciation for what you’ve done, which is exactly what these two sons did for their dad when they bought a nice 1966 Chevrolet Chevelle for him.

How did these sons know what to buy? Well, like a lot of fathers he spent their childhoods talking about classic cars and they learned early on what his favorites were. Plus, the guy had a ’66 Chevelle he started to restore, but he never finished the project and eventually sold it to help his kids pursue their dreams.

These three young men were smart enough to realize since their father sacrificed so much for them, it would be nice if they sacrificed and bought a nicely restored Chevelle for him. It’s a touching gesture of gratitude instead of the entitled, screeching attitudes we see portrayed by youth in the media far too often these days. In other words, with guys like these in the world there is most definitely hope for the younger generation.

This video has been out for a couple of years, so you might have already seen it. If not, definitely give it a watch. Even if you have seen it, after how craptacular 2020 has been it might still be a good idea to give it another whirl. Also, we don’t think it’s a coincidence what poster these sons have in the background as they’re introducing everything.