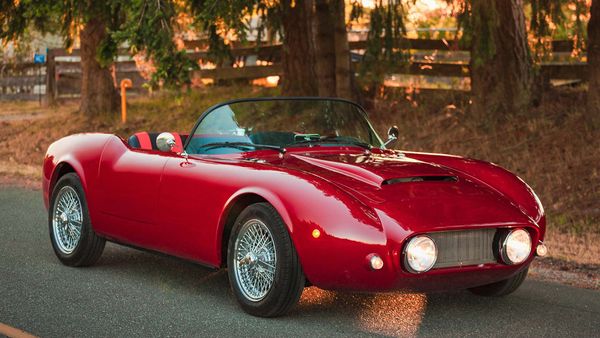 How a scale model turned into a life-sized sports car.

We've probably all had visions in our head for what we think might be the perfect car, but sadly most of these cars remained locked away in our imagination. For Jim Simpson, that wasn't enough, so he began making kit cars that show his own interpretation of some of the most iconic classic European sports ever made, and one of those is this Simpson Design Swift, which will be up for grabs this weekend through Lucky Collector Car Auctions.

The idea for the Swift was inspired by the design of the Lotus XI, but as you can tell, this isn't just another recreation. The styling is completely unique, and the process for making the Swift a reality is as interesting as the car itself. Simpson started with an idea that he turned into a toy-sized 1/24th scale model that eventually led to a 3D rendering and 1/5th scale model.

This eventually the life-sized roadster wearing a fiberglass body and the chassis and running gear from a Mazda Miata. The end result is a roadster in the purest form with no top no heater, no air conditioning and no power steering to go along with a curb weight of just 1,400 pounds. Reading the details about what it took to bring the Simpson Design Swift to life shows the level of detail from its designer such as the desire for a C1 Corvette windshield. Whoever buys this car will surely get a unique roadster that is as fun to drive as it is to show off.

This Miata-based, European-inspired kit car will be up cross the auction block along with more than 200 classic and collector cars at the Lucky Collector Car Auctions 2020 Fall Classic. This auction takes place this weekend, so be sure you're registered to bid for a shot at owning an incredibly unique car like this Simpson Design Swift.