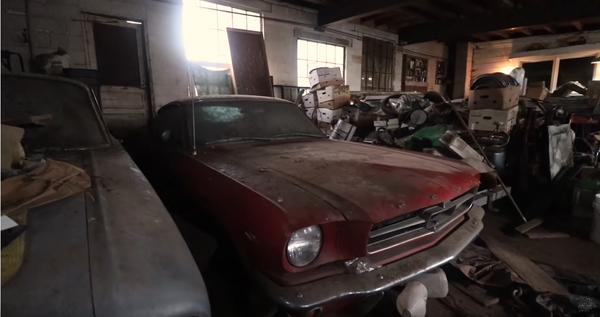 And yes, they were actually in barns for once.

Matt from YouTube channel IronTrap Garage has stumbled across a stash of genuine barn find cars in Pennsylvania. We’re not talking some old muscle cars sitting in a field being called a barn find. This is 50 classics from different eras, spanning as far back as the 1930s all the way to the later part of the 20th Century, with muscle cars mixed in with hot rods and more. Chevrolet Corvettes, Ford Mustangs, Volkswagen Beetles, and many others are included in this cluttered collection.

Maybe you hear about barn finds all the time and feel a little jaded concerning the term. Watch the video below and you might discover some genuine joy. None of these cars have left the barn in the past 30 years and they’re pretty buried in boxes, parts, furniture – you name it.

Everyone seems to wonder why people stash away cars like this. It’s a good question, because so often nothing happens with them until that person dies. That’s the case here, where one man accumulated these 50 cars, hid them away, put stuff all over them, and essentially did nothing with them for decades. Maybe he thought it was a good investment strategy to help his widowed wife after he was gone? Maybe he was paranoid people would take his beloved vehicles? Who knows?

If you see something you like, these cars are going to be auctioned off at different venues throughout 2020. One of the first to hit the block will be a 1965 Ford Mustang that’s optioned up with AC, power steering, and more, plus it has the 289 in it. Another which no doubt will fetch a nice price is a 1954 Chevy Corvette in Sportsman Red, a rare color indeed since a mere 100 bore that paint out of the factory. The one big hit on it is a small-block V8 engine swap, so it’s no longer numbers-matching.

The first wave of auctions is set for late April and the details are available in the video.