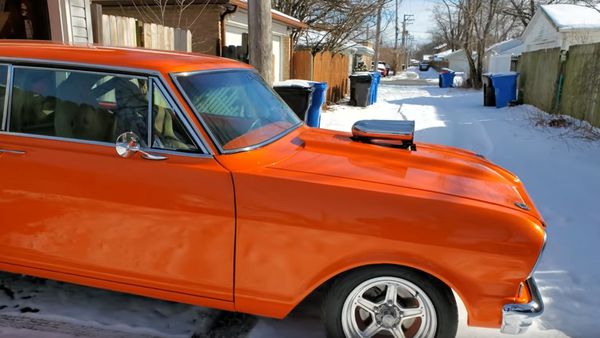 Not everyone is a fan of loud, fast cars early in the morning.

With people cooped up at home during the quarantine, it seems like many are very much on edge. Even during the best of times, certain neighbors complain about any car which makes more noise than a brand-new Toyota Camry. That’s the premise for an angry woman coming to a Michael Matthew’s door to complain about his 1965 Chevy Nova SS hot rod, with the whole conversation caught on camera.

There are a lot of odd things to pick apart in the exchange above. Among them is how the owner of the hot rod, YouTube user Michael Matthew, keeps referring to his vehicle as a “race car.” At the same time, it’s not entirely clear what the neighbor wants him to do about the noise the modified Chevy makes. One could assume she’s pushing for him to sell it, but that’s just an assumption. She also makes vague references to local noise ordinances.

Unfortunately, many enthusiasts are familiar with this kind of situation. Sometimes neighbors are so passive-aggressive they just leave a nasty note under the wiper blade asking if the car’s muffler is “broken.” Many people today expect cars to be virtually silent.

This Nova SS looks pretty nice. The paint is Pearl Tangelo Orange and was originally developed by Lamborghini, which is why you probably think it’s familiar. There’s a decent-sized blower coming through the hood, and it’s bolted up to a 548 Chevy Big Block V8 from Dart. Also included are Brodix heads, automatic transmission, and a Ford 9-inch rear with 3.90 gears. Just the fact it’s an auto is enough to turn people off, and understandably so.

In case you’re wondering, Matthew lives somewhere in the Chicago area. He jokingly calls his car, which he bought a few months ago, “Karen’s nightmare.” Thanks to questions from his followers after posting the video of his neighbor complaining about the car, Matthew used a decibel reader to see just how loud it is. With the meter about ten feet away, it registers about 99 decibels.

According to Noise Pollution Clearinghouse, cars can’t generate more than 55 decibels within any residential unit 9 pm to 8 am in the Chicago neighborhoods. We don’t know how loud it gets in this neighbor’s house, but she apparently intends on calling the cops, then asking for their manager to get to the bottom of things.

Michael Matthew says he doesn’t daily his Chevy Nova SS, but he does drive it “more often (than) most people drive their toy cars.” In other words, he’s pulling out in the morning to go to work in his hot rod fairly regularly, a fact which obviously angers this neighbor since for a few moments there isn’t pristine serenity all around.

All this isn’t to say we approve of how Matthew behaves with his car, or how he posts videos on the annoying portrait orientation, which should be outlawed. On his YouTube channel there’s a video of him performing a burnout at a fairly busy intersection. He also has at least two videos of him participating in street races. This highlights the fact that as car enthusiasts we can have fun, but we also need to be responsible, otherwise we run the risk of turning public opinion against the hobby. At the same time, the neighbors of the world need to calm down and stop complaining about the rumble of a nicely-tuned V8.

Check out what Noise Pollution Clearinghouse says about vehicle noise in Chicago here.