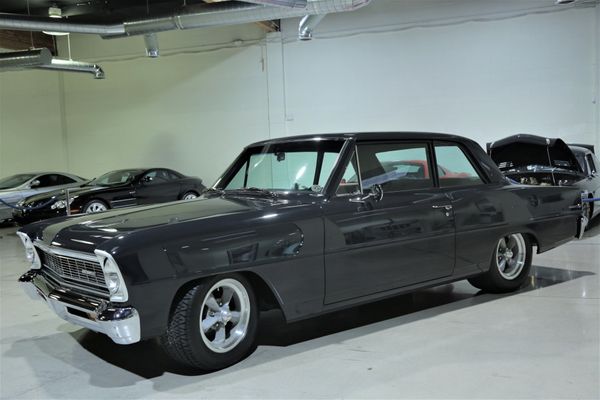 This show car has looks to kill, and the powertrain to back it up!

The one thing the big three have always had in common is that they are always trying their best to out do the other two. When Ford would sell a lot of one style of car General Motors and Mopar would produce a competing model and visa versa. Truth be told that is how the automobile has become what it is today and that “always trying to get a leg up on the competition” mentality is exactly what brought us the Chevy II.

While the new Chevy proved to be a worthy competitor to the Ford Falcon and the Plymouth Valiant in sales, from the perspective of true gear heads, the cars were under powered for the first 3 years. Even with the release of the Super Sport option in 1963 the most powerful factory available engine was the General's straight-six, leading Nova enthusiasts to implant their favorite power plant. However, with sales taking a hit due to the introduction of the Chevelle, GM started listening and 1965 went down in history as the year the Chevy II Nova became a muscle car.

Even with the SS variants 300-horsepower 327 option the engine swap trend persisted into the second generation. Although I am not sure which engine this beautiful Slate Gray 1966 Chevy II Nova rolled off the lot with, but the current fuel injected LT1 power plant it sports now is obviously one of many upgrades it has received over the years.

Controlling all that new found power is a set of Wilwood disc brakes, a rack and pinion style power steering, and what appears to be extensive suspension work. The interior is masterfully finished with black leather, A/C, and a custom radio install that is professionally and tastefully done. With a little over 2,600 miles on the build Fusion Luxury Motors is offering this beauty at a bargain of only $69,950.