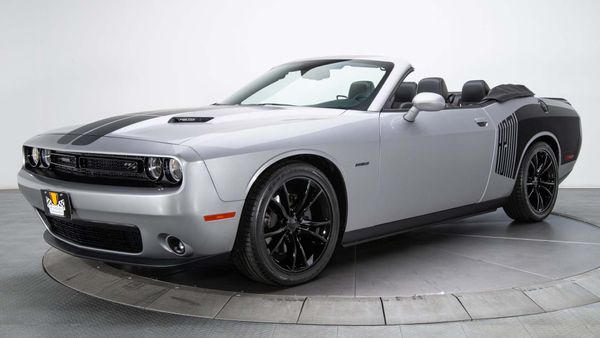 This drop top muscle car was previously owned by the NBA superstar.

When you're a 7'1" NBA legend, regular cars just aren't going to cut it for you. That's why Shaquille O'Neal has owned some oddly customized vehicles including a 1998 Ferrari F355 Spider that received additional legroom, but one of the cooler cars that has passed through Shaq's fleet over the years is this 2016 Dodge Challenger R/T convertible.

Although this car was recently sold through RK Motors, it's still an interesting look at the type of vehicles Shaw has owned. The biggest modification made to this Challenger, of course, was transforming it from a hardtop into a convertible, and that was performed by Drop Top Customs of High Springs, Florida. To give it a classic Mopar look, this drop-top Challenger has Hemi body decals like the classic 'Cuda had.

In addition to the fully functioning power-retractable soft top, a beefier strut tower brace was also added under the hood, but other than that, the R/T's 5.7-liter Hemi V8 was left alone. We have no clue why Shaq opted for the standard R/T instead of modifying Hellcat, but it's a super-clean car that has just over 5,000 miles.

To accommodate Shaq, the driver's seat was modified to offer extra legroom, and all of the seats were wrapped in Katzkin leather. The car was also sold with a full-size cardboard cutout of Shaq as well as images of him with the car being customized.

RK Motors may have already sold this custom 2016 Dodge Challenger R/T convertible, but if you still want to own a car previously owned by Shaq, check out this 1998 Ferrari F355 Spider.