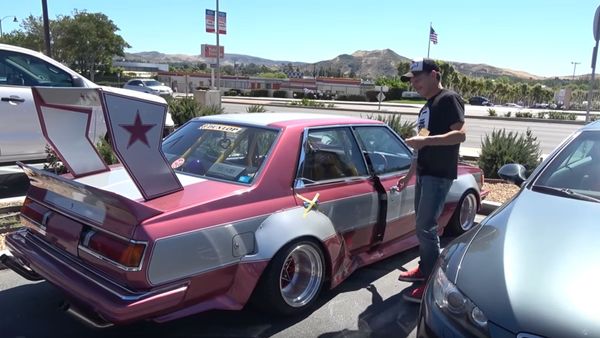 You either love this car or hate it.

Most Americans don’t know much if anything about Bosozoku car culture in Japan. When presented with the comically huge front splitters, towering exhaust pipes, and other styling cues characteristic of the movement they often laugh and/or vomit. With Bosozoku increasing in popularity in the United States, you need to at least know what it is and why it is, even if you hate the look. A good way to gain some understanding is to watch the video accompanying this post, which shows YouTuber effspot take delivery of his BosozokuToyota Cresta which had freshly arrived from Japan.

If you watch the video, you’ll see the Toyota has some nice, unexpected upgrades. Sadly, a monstrous engine swap isn’t one of them.

Roughly translated, “Bosozoku” means “violent running tribe.” This subculture which has been ruled by some pretty notorious gangs in Japan cropped up in the 1950s as the country was rebuilding after the devastation of WWII. According to some, it was young kamikaze pilots who started up the crazy Bosozoku styling with motorcycles as a way to cope with their fallen honor and the lasting stress of warfare – just like how GIs in the US fueled the chopper culture. They would purposely tune the motorcycles to be extra noisy as well as fast, often ditching local police during their late night debauchery.

Over time the Bosozoku culture spread to cars as well as bikes. The philosophies of the Bosozoku gangs were transferred to an extent, including the adoption of “bushido” or “the way of the samurai.” The youth had a complex system of honor which resulted in many bloody conflicts between rival gangs.

Today, many have declared Bosozoku culture pretty much dead in Japan. Others say it’s making a comeback but it’s different. However, the wild styling still has its attraction for some of the same reasons why people like stanced cars: it’s not about performance but instead about annoying traditionalists while making a statement.