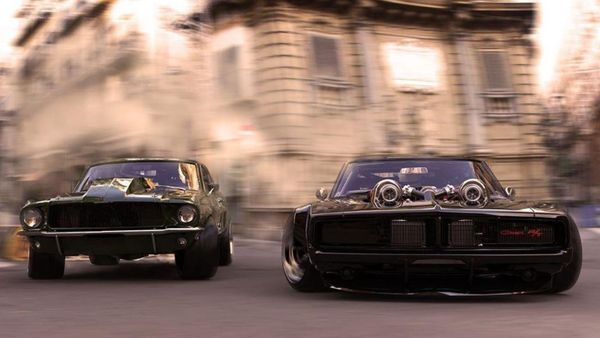 Should anyone be messing with something so beloved?

The 1968 action movie Bullitt is considered one of the best classic films among car enthusiasts. The chase scene in hilly San Francisco between the Ford Mustang and Dodge Charger is iconic, especially since it was all real with no lame special effects used in other movies at the time. It was wildly influential, impacting later movies and TV shows, and even inspiring a commercial a couple of years ago. While a remake of the movie hasn’t been done by Hollywood yet, digital artist Kalim Oozeear took it upon himself to imagine how that might look.

Purists will absolutely be horrified by what Oozeear came up with. The 1968 Dodge Charger has been slammed within a hair’s breath of the ground and been given a healthy widebody treatment. Two turbochargers rise above the hood, indicating this is not anything like the original muscle car, which also sports a murdered-out appearance appropriate of a bad guy car.

Then there’s Steve McQueen’s 1968 Ford Mustang, the car which set imaginations ablaze and has been replicated in numerous Bullitt editions. Thankfully it retains the Highland Green paint and it hasn’t been slammed and given a widebody kit, but an adjustable rear spoiler and power dome hood indicate some performance tweaks.

There’s just no way these cars, especially the Mopar, could perform the jumps in the chase scene from the movie. It would be a bone-jarring, metal-grinding event to make everyone cringe. Oozeear doesn’t attempt to portray that, but instead has a still of the two muscle cars going through a turn and video of the faceoff between them.

Oozeear has an active Instagram account and Facebook page where he posts his digital renderings regularly. His style is very much in-your-face with widebody kits, monstrous turbochargers rising like some sea creature from hood cutouts, wild paint colors, and plenty of aero effects are prominently displayed.