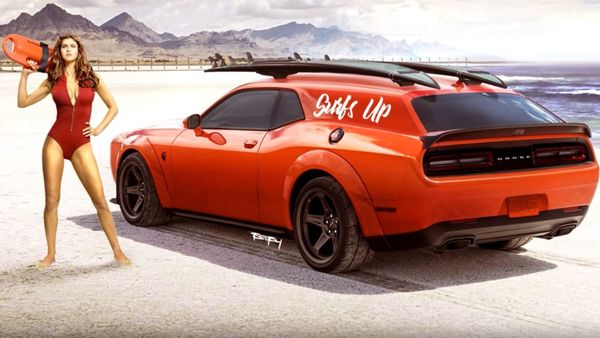 That’s it, we’ve officially seen it all.

When one thinks of American muscle cars there’s a lot of cool imagery that could pop into your head. Smoky burnouts, blistering quarter-mile runs, and aggressive designs are probably at the forefront. However, at least one artist thinks what the world truly needs is a Dodge Challenger wagon designed for lifeguard duty at a Southern California beach, or in other words Baywatch.

Look, there’s a reason Baywatch was canceled after its first season, a fact we had to look up. There’s really no substance to the TV show, and from what we read online the movie’s more of the same, just with Mr. Dwayne Johnson instead of David Hasselhoff. Why this is inspiration for a special version of any muscle car is beyond us, but maybe you think the Mopar rendering is cool?

Right up front, perhaps we should be grateful this is just a wagon rendering and not a Dodge Challenger SUV. After all, wagons still handle well, even if they lose their muscle car looks with that elongated roofline. However, considering the Dodge Magnum was a pretty quick failure (not saying it was a bad car) there’s little hope Dodge would make this vehicle a reality.

We have TheSketchMonkey to thank for this weird Mopar muscle car rendering – are you really that shocked? The guy has a penchant for the bizarre and so he’s going to delight some and repulse others. For good measure, he adds a wide body kit.

His comment about needing a wagon to fit a couple of surfboards on the roof. And here the artist’s ignorance about American culture is exposed, because lifeguards here don’t use surfboards like in Australia and some other English-speaking countries. Why? How should we know? We’re just a bunch of gearheads. The real question is how do you feel about this Dodge Challenger shooting brake designed for beach rescues? Leave a comment and let us know.