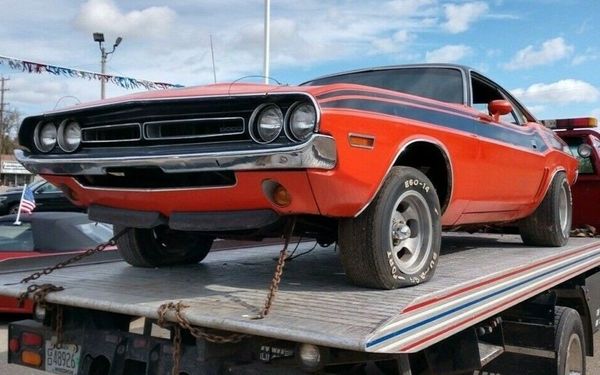 The first-generation Dodge Challenger made its big debut for the 1970 model year, and it was produced until 1974. For the go-fast enthusiast, a performance model was also introduced in 1971 called the Challenger R/T (Road/Track) and was available with a few different engine options. This particular 1971 Dodge Challenger R/T 440 Six-Pack is packed with potent power that will smoke most of the competition. This potent beauty was listed on eBay where it sold for $19,100 out of 26 bidders.

Finished in a bold orange with contrasting black stripes and black vinyl roof, this vintage Mopar is flashy inside and out. Bolted to all four corners are a set of fat tires that protrude from the wheel wells. Black lettering can be found throughout as well as a nice wing on the back.

The potent powerplant is a 440-cubic-inch (7.2-liter) "Six-Pack" V8 engine that is capable of 375-horsepower, although this motor is not original to the car. Exclusive to the Challenger R/T model, the "Six-Pack" is topped with three double-barrel carburetors that feed the hungry engine and is equipped with 10.3:1 compression. Shifting power to the rear wheels is the original numbers-matching 4-speed manual transmission. While the 426-cubic-inch Hemi is also on the order list for the R/T, the V-Code Six-Pack would be hard to beat.

The doors open to a black interior, and the bucket seats that were removed also come with the sale of the car, and that includes the orange plaid inserts that have seen better days.